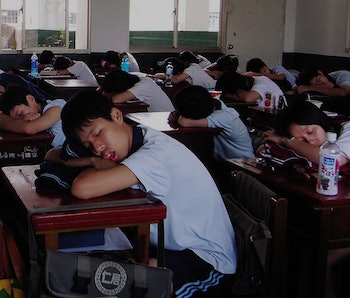 Big Brother is at it again, and this time he’s out to make your boring classes even more miserable.

A new A.I. system is about to be deployed for some online courses at the ESG business school in Paris that will supposedly help, or pester, students into focusing. The software, designed by LCA Learning, employs facial-recognition software that can read the emotions of a student sitting in front of a computer and will constantly record them while they watch a lecture.

Amidst controversy that new technology is being thrown into classroom settings whether or not it will actually help students, advocates for this A.I., known as “Nestor,” argue that by detecting when students drift off or lose focus, professors will learn how to be more engaging and improve their craft.

Because if there’s anything professors love, it’s being told that they’re too boring.

Particularly obnoxious is Nestor’s quiz-generating feature. If you’ve ever spoken to a college student, you’ve heard that every final exam they’ve ever taken was on stuff not covered in the class. Well, Nestor is going to make sure that’s the case every time.

It’s common for online courses to provide quizzes after each session to make sure that students didn’t just let the lecture run then leave the room. This is standard practice for required online training modules and other mandated sessions that result in certification or security clearances, like the sexual assault training courses taken by college students before moving to campus.

Now, Nestor will assemble quizzes based on whatever the professor covered while you weren’t paying attention. So if the A.I. sees you lose focus, it will make sure to ask you questions about whatever you tuned out, forcing students to constantly relive the nightmare of being woken up in class by their teacher asking them for an answer.