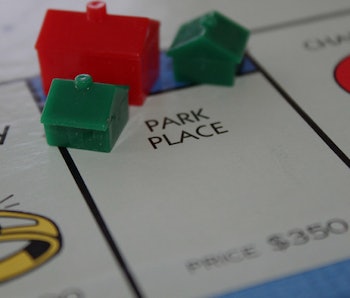 In 1904, Lizzie Magie patented “The Landlord’s Game,” a board game about property ownership, with the specific goal of teaching players about how a system of land grabbing impoverishes tenants and enriches property owners. The game, which went on to become the mass-market classic “Monopoly,” was the first widely recognized example of what is today called “persuasive play.”

Games offer a unique opportunity to persuade their audiences, because players are not simply listening, reading, or interpreting the game’s message — they are subscribing to it. To play a game, players must accept its rules and then operate within the designed experience. As a result, games can change our perceptions and, ultimately, our actions.

In American University’s Game Lab and Studio, which I direct, we’re creating a wide range of persuasive games to test various strategies of persuasion and to gauge players’ responses. We have developed games to highlight the problems with using delivery drones, encourage cultural understanding, and assess understanding of mathematics.

Teaching math with a video game: Aim the laser with mathematical formulas.

And we’re expanding the realm beyond education and health. With support from the Knight Foundation, we’ve been researching ways to connect games and journalism to engage people more deeply with issues in the news. (The Knight Foundation has also funded The Conversation U.S.) Our newest game, helping people and news organizations distinguish between real news and fake reports, is out now.

When talking about games as a persuasive tool, I often repeat the notion that readers read, viewers watch, and players do. It’s not a coincidence that when sitting down to learn a new game, a prospective player most often asks, “What do you do?” Persuasive play offers people the opportunity to do more than merely read or watch — they can engage with the game’s subject matter in fundamentally valuable ways.

In our work, we want to enhance people’s understanding of complex topics, change their perspective, and encourage them to think critically about the world around them.

For example, Game Lab faculty member Bob Hone worked with the National Institute of Mental Health to create a game that is now in clinical trials as a treatment for anxiety without medication. The game, “Seeing the Good Side,” asks players to find numbers hidden in detailed drawings of classroom scenes. In the process, players practice calming themselves by looking around an entire space rather than focusing on one person’s anxiety-provoking angry face.

Games can relieve stress in other ways, too. A recent study we conducted with Educational Testing Service found that a game we created to replace multiple choice standardized tests offered a more positive test-taking experience for students. In addition, students were better able to demonstrate their abilities.

Turning to the News

Persuasive play is most common in education and health, but it’s becoming more common in other fields, too. We’ve been working on using game design techniques to get people to engage with the news. We’ve also proposed adapting lessons from gaming to attract and retain audiences for news websites.

One project we did involved creating a game for WAMU, a National Public Radio affiliate in Washington, D.C. The station was covering public transportation failures in the city, specifically of the D.C. Metro subway and train service. We designed a game to increase audience engagement with the material.

WAMU sent an experienced reporter, Maggie Farley, into the field to interview a variety of Metro riders about their experience. We aggregated those stories into a single narrative and then made that story playable. In our “Commuter Challenge,” players have to make it through a week on the Metro system as a low-wage employee in the D.C. Metro service area.

The problems facing players align with real-world trade-offs the reporter found people making: Should a worker choose a pricey ride-share service to get to the daycare in time for pickup or save money by taking the train but risk incurring fees for being late? Should a worker trust the announcement that the train will be only 15 minutes late or decline an extra shift because of rail service outages? Players have to balance their family, work, and financial demands in hopes of ending the week without running out of money or getting fired for being late to work.

WAMU found that the game got four times more visits than other Metro-related articles on its site. And people spent four times longer playing the game than they did reading or listening to the standard news coverage. People, it seemed, were far more eager to play a game about the plight of Metro riders than they were to hear about it.

Most recently, we released a game called “Factitious.” It works like a simple quiz, giving players a headline and an article, at the bottom of which is a link to reveal the article’s source. Players must decide whether a particular article is real news or fake. The game tells the player the correct answer and offers hints for improvement. This helps players learn the importance of reading skeptically and checking sources before deciding what to believe.

In addition, for each article we can see how many people understood or misunderstood it as real or fake news and how long they took to make the decision. When we change headlines, images, or text, we can monitor how players’ responses adjust, and report to news organizations on how those influence readers’ understanding. We hope games like this one become a model for getting honest feedback from the general population.

While the original “Monopoly” aimed to explain the drawbacks of land grabbing, contemporary persuasive play has even grander hopes. This new generation of games aims to learn about its players, change their perceptions, and revise their behavior in less time than it takes to build a hotel on Park Place.

More like this
Gaming
16 hours ago
God of War Ragnarok theory reveals a shocking return to a familiar setting
By Joseph Yaden
Gaming
7.4.2022 4:00 PM
GTA 6's most controversial rumor probably won't happen — here's why
By Robin Bea
Culture
7.1.2022 9:00 PM
Male celibacy has evolutionary benefits — but not for the reasons you think
By Ruth Mace, Alberto Micheletti and The Conversation
Share: