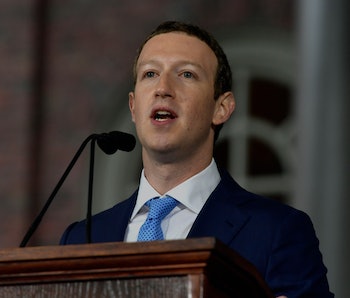 “This is the struggle of our time. The forces of freedom, openness, and global community against the forces of authoritarianism, isolation, and nationalism. Forces for the flow of knowledge, trade, and immigration against those who would slow them down.”

The Facebook founder didn’t mention specific examples of oppressive forces, but the subtext is clear. And while some have speculated that Zuckerberg himself might run for president, the 33-year-old embraced a post-political view of the world:

“In a survey asking millennials around the world what defines our identity, the most popular answer wasn’t nationality, religion, or ethnicity: It was ‘citizen of the world.’ That’s a big deal. Every generation expands the circle of people we consider ‘one of us.’ For us, it now encompasses the entire world.”

Why are nationalism and other dangerous forces on the rise? Zuckerberg said it’s because of uncertainty and fear:

“There are people left behind by globalization across the world. It’s hard to care about people in other places if we don’t feel good about our lives here at home. There’s pressure to turn inwards.”

How can global citizens prevail?

On a broader level, Zuckerberg suggests we consider policies like universal basic income, that give people the safety net they need to try new things; and he calls for everyone who can to give time and money to charity. On a personal level, he calls for people to build communities:

“The struggle of our time … isn’t going to be decided at the UN either. It’s going to happen at the local level, when enough of us feel a sense of purpose and stability in our own lives that we can open up and start caring about everyone. The best way to do that is to start building local communities.”

Facebook has, of course, become Zuckerberg’s not-uncontroversial attempt to promote connections on a universal scale. As for controversy, Zuckerberg had a good bit about that too:

“Anyone working on a big vision will get called crazy, even if you end up right. Anyone working on a complex problem will get blamed for not fully understanding the challenge, even though it’s impossible to know everything upfront. Anyone taking initiative will get criticized for moving too fast, because there’s always someone who wants to slow you down.”

More like this
Culture
15 hours ago
Male celibacy has evolutionary benefits — but not for the reasons you think
By Ruth Mace, Alberto Micheletti and The Conversation
Culture
6.30.2022 11:30 AM
You need to watch David Fincher's most important techno-thriller before it leaves Netflix this week
By Eric Francisco
Culture
11 hours ago
The 50 best cheap home improvement products skyrocketing in popularity on Amazon
By Christina X. Wood
Related Tags
Share: