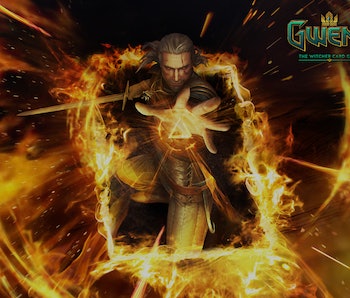 On Wednesday, CD Projekt RED’s standalone version of The Witcher 3’s popular tavern mini game launched into open beta on Xbox One, PlayStation 4, and PC — giving players interested the opportunity to face down their friends with custom decks of cards following a closed beta access period. Unlike other collectible card games, such as Blizzard’s ever-growing Hearthstone, Gwent: The Witcher Card Game offers a completely different and refreshing experience, which promises plenty of support for various styles of play.

There are hundreds of gorgeous cards, with animated art, dozens of strategies for you to learn to fight the competition with, and a set of five different factions for you to collect cards over your time with the game. Best of all, however, is Gwent’s focus on providing a game built on mastery instead of card collection, meaning that you don’t have to own the most dangerous cards to win a match (although they certainly make things easier).

If you haven’t had a chance to play Gwent in The Witcher 3 before, however, things may be a little confusing when you first dive into the standalone version of the card game. Here’s a few tips to help you get started.

Gwent is a relatively straightforward card game that relies a lot more on strategy than powerful cards. Each match consists of three different rounds, and you must win two to claim victory. To do so, you’ll have to gather more total unit strength — which is displayed at the top and bottom of your player board — than your opponent.

Placing units on the battlefield increases your total strength, but you can only place one card on the board with each passing turn. Most units can only be placed on a certain row, which are separated into Melee (the closest row to your opponent), Ranged, and Siege. Some special cards can also be placed onto multiple rows, meaning you can use them to bolster whichever unit type needs the support in a match.

Unlike a traditional collectible card game where you would draw a new card with each passing turn, Gwent focuses on strategic placement and use of the cards made available to you at the beginning of the game. During the opening round, you’ll be able to swap up to three from your hand for additional cards from your deck. These cards are your lifeline for the entire match, as you’ll only be able to draw additional cards with each passing round (two cards for round two, one card for the final round).

Since you cannot refill your hand easily, you’ll want to use your cards wisely. Having more cards in your hand than your opponent is key to winning a round because it puts you in control of the flow of battle. If you have a heavy lead on your opponent don’t put down cards you don’t need; simply pass the turn and claim the round without wasting valuable opportunities.

Gwent consists of three classes of card: Bronze, Silver, and Gold. Usually the rarer the card, the more powerful the card, although you’re limited to holding a small amount of both Silver and Gold cards in your deck. Certain cards offer abilities, which can provide benefits such as buffing friendly unit cards’ strength values or limiting the power of your enemy’s units with one fell swoop. Make sure to build your deck around these abilities, synergizing them whenever you can.

There are also special cards, which don’t deploy units on the battlefield but allow you to damage enemy cards directly, summon additional units, or limit the strength of your opponent’s units on a specific row using weather conditions. Be on the lookout for how to use this card to your advantage, and how to trick your opponent into using them against your weaker units.

If you’re interested in trying Gwent: The Witcher Card Game for yourself, you can do so here.