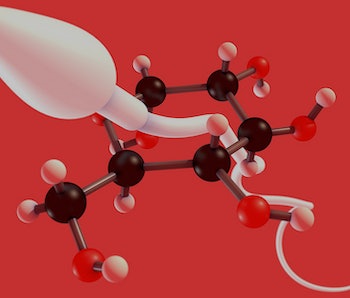 It’s inside every dude, but sperm remains largely a mystery. Despite its omnipresence, researchers are still asking basic questions like, It’s got one job, so why is it so bad at it?

Sarah Calvert, a research associate at the University of Sheffield, studies sperm — specifically the mystery of how they swim. For the first time ever, she and her team are one step closer to figuring it out, thanks to magnetic resonance technology.

“I’m really interested in unusual cells, and sperm really typify this,” Calvert says. “They are essentially DNA torpedoes.” Except that Kim Jong Un’s at the switchboard. “They’re not always made that well,” Calvert says. “In a normal man’s sperm, something like only 55 percent of them will swim [toward the target egg].” The rest get lost.

The fact that sperm are clearly directionally challenged is thought to be one part of the persistent problem of male infertility. The researchers hypothesized the components of sperm might also be to blame. Calvert’s research shows they were right — sort of.

Ejaculate is a sticky mix of sperm cells and seminal fluid. To sort the cells from the fluid, Calvert’s team washed samples of ejaculate very carefully. Then they spun them about using the magnet-based technique (similar to an MRI you might get of your brain), sorting sperm according to quality.

What they found surprised them. Calvert’s team had hypothesized that the more sugars a sperm had its disposal, the higher performing it would be. Nutritionally, that makes sense, if you consider Olympic swimming as a metaphor for how the sperm are moving, and how competitive swimmers require many calories. But the experiment revealed that it was actually the lower quality sperm that was full of sugar, choline, and lactase. The truly Olympic sperm — according to the low, low bar of being able to swim forward — was a lean, mean fighting machine.

“We wonder if [the absence of extra sugars] has to do with trying to get sperm to be as efficient possible,” Calvert says. The weak sperm seemed to be compromised by the extra sugars, which may have added an extra membrane wall to their shape, knocking them off balance and leaving the lean sperm to fight their way to the prized egg.

The implications of this research are, in the long run, enormous. Infertility is typically characterized as a women’s issue. Just look at the CDC’s infertility FastStats and FAQ pages. They talk about infertility in the United States this way (as if a male and his sperm aren’t involved):

Still, with that many couples struggling to conceive, many turn to the lab for help. Today, you can pay for intracytoplasmic sperm injection, where sperm is injected directly into an egg, which is implanted into a woman’s body, or more commonly for in vitro fertilization, where sperm swims to an egg in a petri dish, and is then implanted into a woman’s body.

Unfortunately, IVF has an awful failure rate. Between one-fourth and one- third of IVF cycles fail. If it was free, maybe it’d be ok, but it’s not: Each cycle costs on average $12,000.

But imagine this sperm-y future, brought to you by Calvert’s new research: Using this scanning technology, we may one day learn what makes sperm healthy or sick. We can then take that knowledge and the scanner itself into a clinic. There, we can scan a man’s sperm while it’s alive, sort it according to its quality, and use the best members of that sperm sample in that day’s IVF cycle. And then we can stop the Handmaid’s Tale future that’s hurtling toward us and all is not lost. It’s a long ways off, but it’s the future Calvert hopes she’s helping to build.