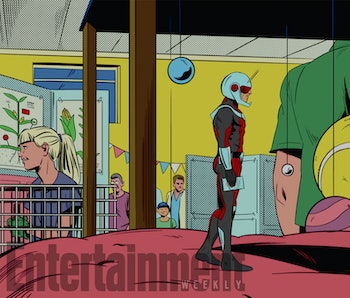 Scott Lang’s Ant-Man is making his way to the small screen by way of Marvel’s Ant-Man, the next installment in Marvel Animation’s series of cartoon shorts.

As reported by Entertainment Weekly, Scott will be voiced by Josh Keaton (Voltron, The Spectacular Spider-Man) and will “fight evil alongside the Wasp and Hank Pym. He’ll score occasional breaks to help daughter Cassie with her homework.”

Marvel Animation’s previous short project focused on the misadventures of Rocket and Groot of Guardians of the Galaxy fame and resulted in an adorably hilarious collection of 2-minute videos. The Ant-Man shorts will follow in the same footsteps, featuring six 2-minute videos in total, directed by Ugo Bienvenu and Kevin Manach, and written by Brian Wysol.