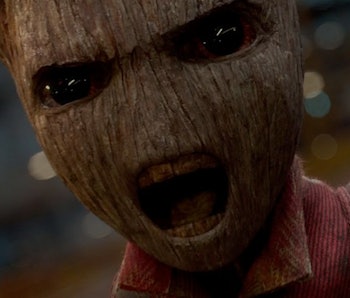 Yes, Guardians of the Galaxy Vol. 2 had five post-credits scenes, but it’s hard to complain when one of them gave audiences a glimpse of everyone’s favorite tree, Groot, at another stage of his life.

Extremely light spoilers from Guardians of the Galaxy Vol. 2 are below, just FYI.

Unlike the first Guardians, Groot survives the end of the sequel, largely because his adorable Baby form managed to remember which button Rocket told him to press — not the instant death one. Because he makes it out in one piece, this lil Groot gets to grow up, and in one post-credits scene, we see what it looks like when he goes through puberty (or perhaps pubertree).

In the scene, Star-Lord walks into Teen Groot’s messy, messy room to see the sullen teenaged plant mostly ignoring him while playing some sort of game. Star-Lord tries to get his attention, but as all parents know, dealing with teens is hard. When Groot responds, his voice keeps cracking (“I am GroOOoOt”), and Star-Lord complains that his vines are everywhere. Which, depending on how Groot’s biology works, could actually be pretty disgusting if he’s anything like a normal teen.

There aren’t any official images of Teen Groot out there yet, but this Funko Pop figure gives a pretty good idea of his attitude.

There were some haters, though. When you’re a teen, it feels like the world is out to get you, so Teen Groot probably wouldn’t be too surprised. Chances are he’d jam to My Chemical Romance or something.

Luckily for the haters, Teen Groot seems like it’s a one-off thing. Because Vol. 2 takes place only a couple months after the first movie, there’s going to be a four-year timeskip before we see the Guardians again in Avengers: Infinity War. That, presumably, means that Groot will be all grown up when he’s next on our screen, so this post-credits scene is probably all the Teen Groot we’re gonna get.

Guardians of the Galaxy Vol. 2 is currently in theaters.