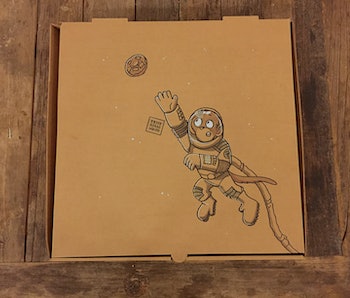 The early days of the Milky Way were probably pretty chaotic, with huge clumps of dark matter pulling together anything they could to eventually form stars, planets, and other space miscellanea. That’s our understanding of how planets were formed: there was a bunch of stuff floating around and it got pulled together by gravity and now we live there.

Research published Monday into the collisions of planet-sized objects proposes a new structure called a synestia, which resembles a gigantic space donut made of the vaporized remains of whatever matter forms crashed together. While a synestia has never been observed, the researchers behind the idea suspect that Earth and many other rocky planets took the form of synestias at least once during their development.

This new model matches the existing assumption that as planets were forming, they were frequently destroyed and reshaped by collisions with other planets and anything else in their path — it’s also assumed that our moon broke away from the earth after one of these collisions. Current models argue that after being blown apart, these early planets quickly (to the extent that a planet can do anything quickly) reformed or developed rings of debris broken off in the impact. In our case, the moon is essentially space debris. But the researchers suggest that in many cases, there would simply be too much stuff for it to be neatly packed together right off the bat or bound in a unified ring.

Rather, a synestia has two parts. There’s an inner region that behaves sort of like a planet in that it rotates at one pace — not unlike the solid, spherical planet that it would eventually form. Then there’s an outer region that makes up the donut of vaporized space debris. Unlike planetary rings, there’s nothing that would make this region rotate at a uniform speed and it slows down the farther out you go. Basically, it’s a giant cloud of superheated planet shrapnel.

The team that proposed the synestia model suggests that these structures would be fairly short-lived, maybe only lasting a hundred years or so. In terms of galactic formation, that’s less than the blink of an eye. This may explain why a synestia has never been observed — we would pretty much have to already be looking in the right direction to catch one before it cooled and condensed into a new rocky planet.

Abstract: During accretion, terrestrial bodies attain a wide range of thermal and rotational states, which are accompanied by significant changes in physical structure (size, shape, pressure and temperature profile, etc.). However, variations in structure have been neglected in most studies of rocky planet formation and evolution. Here we present a new code, the Highly Eccentric Rotating Concentric U (potential) Layers Equilibrium Structure (HERCULES) code, that solves for the equilibrium structure of planets as a series of overlapping constant-density spheroids. Using HERCULES and a smoothed particle hydrodynamics code, we show that Earth-like bodies display a dramatic range of morphologies. For any rotating planetary body, there is a thermal limit beyond which the rotational velocity at the equator intersects the Keplerian orbital velocity. Beyond this corotation limit (CoRoL), a hot planetary body forms a structure, which we name a synestia, with a corotating inner region connected to a disk-like outer region. By analyzing calculations of giant impacts and models of planet formation, we show that typical rocky planets are substantially vaporized multiple times during accretion. For the expected angular momentum of growing planets, a largefraction of post-impact bodies will exceed the CoRoL and form synestias. The common occurrence of hot, rotating states during accretion has major implications for planet formation and the properties of the final planets. In particular, the structure of post-impact bodies influences the physical processes that control accretion, core formation, and internal evolution. Synestias also lead to new mechanisms for satellite formation. Finally, the wide variety of possible structures for terrestrial bodies also expands the mass-radius range for rocky exoplanets.