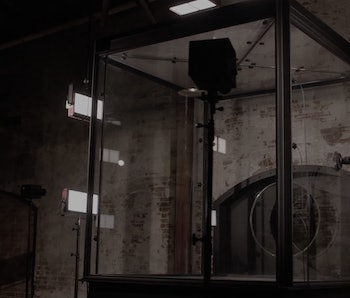 Showtime unexpectedly dropped the first four episodes of its highly anticipated Twin Peaks revival rather than the originally promised two, but one of the biggest questions premiered in the first episode. What’s up with that glass box?

This post contains transparent spoilers from Twin Peaks: The Return Season 1, Episode 1 and 2.

The first episode introduces Twin Peaks fans to a young man (Ben Rosenfield), a Manhattanite, who’s been hired to sit in the basement of a New York City skyscraper and stare at an empty glass box. It seems to be perfectly sealed and pressurized, but it’s empty. This seemingly inconspicuous dude occasionally switches out the memory card in the camera that’s filming the box 24/7, locking the filled cards away in a specifically designed vault.

While said young man is making out and, uh, doing other things with a visitor (an event that fans online are now referring to as “glass box and chill” as a riff on the previously popular “Netflix and chill”), nothing happens until something really, really bad happens.

While the pair is doing other things, the previously empty glass box fills with a black cloud right before a shifting, jittery, pale figure appears inside. The unexplained figure watches them for a moment as the two stare back in horror — then it breaks out of the box and rips the lovebirds to shreds.

In Episode 2, the long-missing Special Agent Dale Cooper (Kyle MacLachlan) departs the Red Room only to turn up in the glass box of doom. And his return is timed shortly before the mysterious entity from Episode 1 kills the lovebirds. That’s another ongoing mystery to be solved throughout The Return, it seems. Fans are speculating that the box is somehow connected to the Red Room (per Dale’s return) or the Black Lodge, and acts as another one of the mysterious Twin Peaks interdimensional portals. Or, maybe, someone has been trying to access them via a science experiment.

You can watch the first four episodes of Twin Peaks via Showtime right now, with new episodes premiering on Sundays.