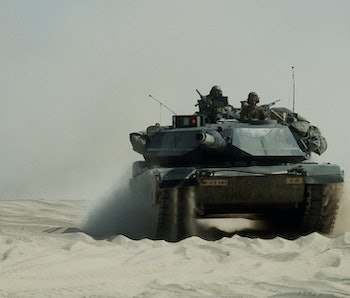 During his trip to the Middle East this weekend, President Donald Trump is expected to announce a massive arms deal with Saudi Arabia, which will provide the kingdom with close to $110 billion in materials, including some seriously high-tech weapons.

The arms deal, which has been in the works for months, was confirmed by both the Associated Press and Reuters on Friday. Though the deal has not been formally announced, the New York Times reported that Trump’s son-in-law and senior advisor Jared Kushner helped hammer out the details with Saudi representatives in early May.

The THAAD, despite its Connecticut lacrosse-player name, is an enormous, $800-million dollar missile defense system that the United States has been developing for the better part of two decades. It’s meant to shoot down short and mid-range ballistic missiles with smaller kinetic missiles, the multi-billion dollar version of shooting a bullet out of the air with another bullet. The THAAD made headlines last when the U.S. decided to stick one on a golf course in South Korea, pissing off the Chinese, who say that the system’s vague capabilities (it’s never been tested in combat, so we’re not completely sure how good it is) upset the balance of power in the region. In Saudi Arabia, which is the United State’s largest Middle Eastern ally after Israel, the system will probably be used as a preemptive deterrent against Iran’s occasional forays into ballistic missiles.

The Trump administration informed Congress on Friday that $500 million of the arms deal would be precision-guided munitions, like laser-guided Paveway II-equipped bombs and Joint Direct Attack Munition kits which would let the Saudis turn normal unguided “dumb bombs” into “smart bombs.” The Paveway II refers to a specific laser guidance system which is used with several different bombs but is specifically designed for certain munitions, unlike the more general JDAM kits.

Wait, why does Saudi Arabia need all these weapons?

Good question. The U.S. has been selling massive amounts of arms to Saudi Arabia for years, culminating in a huge $60 billion-plus arms deal in 2010. The latest $109 billion deal would be the largest single arms deal in U.S. history. Saudi Arabia has been ruled by the Saud family since its founding in 1932, and subscribes to an ultra-conservative doctrine of Sunni Islam known as Wahabbism. Despite the country’s consistent links to terrorism, including the September 11th attacks, the United States has historically seen the Saudi military as an important proxy against Shia Islam powers in the region (Iran, in other words). This is a very simplistic explanation for it, but sticking a THAAD system in Saudi Arabia increases the country’s capabilities to resist ballistic-missile equipped powers like Iran and, potentially, the Syrian regime, which are both inside the sphere of influence of Vladimir Putin’s Russian Federation. Currently, that proxy conflict has manifested itself in Yemen, where the Shia Islam (same as Iran) Houthis wrested power from the Saudi-backed government in 2015. The Saudis, supported by American influence (and weaponry), intervened, prolonging the conflict and drawing sharp criticism from international organizations and human rights groups after the indiscriminate bombing of civilians turned the war into something the United Nations described as a “humanitarian catastrophe.”

That’s where the Paveways and JDAMs come in. According to the AP, the smart bomb technology, along with $750 million in training programs, will help the Saudi Air Force improve their targeting ability, ostensibly so they’ll kill fewer civilians during bombing campaigns. The subtext here is that maybe not giving the Saudis weapons would save more civilian lives than just giving them more accurate ones, but that reasoning does not appear to be a part of the current paradigm of U.S. geopolitics.

More like this
Culture
Jan. 14, 2023
2,454 years ago, one eerily familiar event led to the downfall of Ancient Athens
By Rachel Hadas and The Conversation
Innovation
Jan. 25, 2023
Starship orbital flight: SpaceX successfully loaded the rocket with over 10 million pounds of propellant
By Mike Brown and Molly Glick
Innovation
Jan. 25, 2023
Watch: This jail-breaking wireless robot melts and reassembles on command
By Jennifer Walter
LEARN SOMETHING NEW EVERY DAY.
Related Tags
Share: