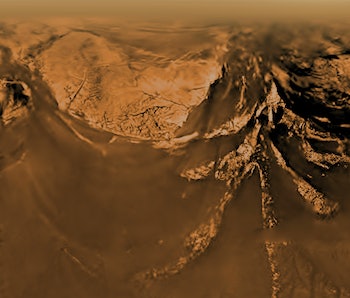 Besides enormous, electrical sand dunes, Saturn’s moon Titan has crazy-looking topography surrounding its rivers, lakes, and oceans (see below). Scientists used to think that Titan and Earth were the only celestial masses to have been molded by liquid bodies. But a closer look at Titan’s riverbeds has now shown researchers that the moon doesn’t actually have as much in common with our planet as many had suspected.

“When you look at these images of Titan or Mars, you see so much — valleys, mountains, lake beds — that strike this familiar chord that associates with Earth,” Benjamin Black, the author of a new study told New Scientist. “But appearances can be deceiving.”

First of all, unlike Earth, the bodies of liquid on Titan aren’t filled with water; the moon is too cold (-179 degrees Celsius) for that. Instead, they’re full of liquid hydrocarbons like methane. But that’s old news.

What scientists have now discovered is that the topography of Titan was formed very differently than that of Earth. Unlike our rivers, Titan’s riverbeds don’t show evidence of recent plate tectonics. Plates on Earth constantly but slowly collide and pull apart, creating mountains and valleys that shift the paths by which rivers flow.

Researchers aren’t yet sure exactly how Titan’s topography formed, but they have some ideas. One major hypothesis is that tides coming from Saturn actually change the thickness of Titan’s icy crust.

Whatever the reason, it appears that Titan’s surface has been shifting recently, and may be changing all the time. Just not from tectonic plates.

Scientists still have many questions about Titan, and relatedly, about Mars. The red planet used to host large bodies of water, and we have a lot more to learn more about how they formed, too. The researchers behind this study are pretty sure that Mars’ topography formed first and molded the paths of the water, as opposed to the other way around.

“It’s remarkable that there are three worlds in the solar system where flowing rivers have carved into the landscape, either presently or in the past,” Taylor Perron, another author on the study, told Phys.org. “There’s this amazing opportunity to use the landforms the rivers have created to learn how the histories of these worlds are different.”

Our knowledge of Titan’s riverbeds comes from an amazing mission being performed by NASA’s spacecraft Cassini. Cassini has been investigating Saturn for 13 years, and it will soon undergo an extremely close flyby of Titan as part of its highly-anticipated “Grand Finale,” so more incredible findings are likely coming our way.