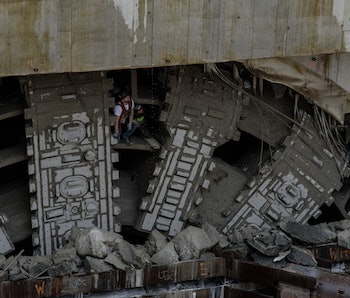 Tunneling, in theory, is simple. You dig a hole down, then dig the hole sideways. But while you’re doing that, you gotta do something with all the dirt. Tesla CEO Elon Musk’s new Boring Company wants to revolutionize tunneling and change urban transit, but to do that, it’s going to have to move a lot of dirt.

On Tuesday, the Boring Company published a list of “all the answers to questions you never asked about holes in the ground,” as Musk put it in a tweet. The FAQ laid out a detailed seven-step plan for tunneling faster, but also addressed the big dirty concern of digging underground. The answer, according to the Boring Company team, is to make bricks.

In typical tunneling projects, excavated dirt is shipped offsite to disposal locations. This process is costly, time-consuming, noisy, and can be environmentally hazardous. The Boring Company is investigating technologies that will recycle the earth into useful bricks to be used to build structures. This is not a new concept, as buildings have been constructed from Earth for thousands of years including, according to recent evidence, the Pyramids. These bricks can potentially be used as a portion of the tunnel lining itself, which is typically built from concrete. Since concrete production accounts for 4.5% of the world’s greenhouse gas emissions, earth bricks would reduce both environmental impact and tunneling costs.

The idea is beautifully simple in theory, but could get tricky in practice. Elon, of course, has announced no plans to start an actual brickmaking company, but the volume of tunneling he wants to do would produce a lot of bricks. Making mud bricks is relatively simple, but making bricks that stand up to construction standards for the tunnels they came from is a solution that’s probably many years out. At least in the beginning, it’s doubtful that the Boring Company will be saving all its dirt, but with Musk, you never know. For now, we just have to watch him dig in and see what comes out.