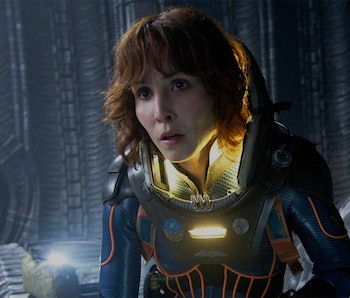 If the xenomorphs and neomorphs of Alien: Covenant aren’t satisfying for Alien fans, they might have someone else to blame, other than Ridley Scott: themselves. The outspoken director has revealed that Alien: Covenant was made the way it was because of fan backlash about Prometheus.

On Wednesday, in an interview with Yahoo, Ridley Scott said he felt that bringing back the original xenomorph to the new Alien movie was important because fans didn’t like Prometheus. Calling the backlash “a pretty good ground zero reaction,” Scott went on to say that he believed the fans “are the reflection of your doubts about something.”

Scott’s “doubts” may be connected to the fact that Prometheus was a completely different kind of Alien movie, which explored themes and concepts absent from any other installments in the series. In essence, though Prometheus has scary moments, most fans don’t consider it to be a horror movie in the style of the original Alien, or even James Cameron’s Aliens. But, this time, the horror element is back for Covenant.

The director was also unclear as to how many more sequels could happen after Covenant. “Maybe two more films,” he said to Yahoo. “Or maybe one. I don’t know.”

Alien: Covenant is out in wide release on May 19.