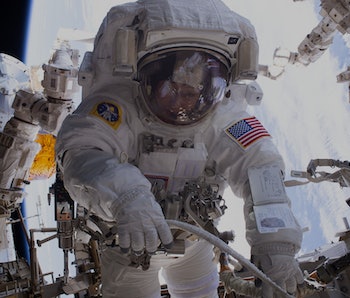 NASA is embarking on a six-and-a-half hour spacewalk to install a protective shield at the International Space Station, and it’s inviting fans to tune in and watch the action. With coverage starting at 6.30 a.m. Eastern time on Friday, Peggy Whitson and Jack Fischer will undertake the station’s 200th spacewalk.

The pair will move through the Quest airlock to replace an avionics box used for science experiments, while also installing a connector to route data through the alpha magnetic spectrometer. This work will enable the crew to work out the best way to carry out maintenance on the cosmic ray detector. Scientists hope that the detector will lead to a better understanding of these mysterious rays, as the instrument will be able to operate without atmospheric interference.

The two crew members will then install a protective shield on Pressurized Mating Adaptor-3, which will allow for a new docking port to attach for commercial crew. The adaptor’s micrometeoroid debris shield floated away earlier this year, when Whitson was working with Shane Kimbrough on readying the adaptor for use. The adaptor will enable companies like SpaceX and Boeing to visit the station, making it an important port for the future of space exploration.