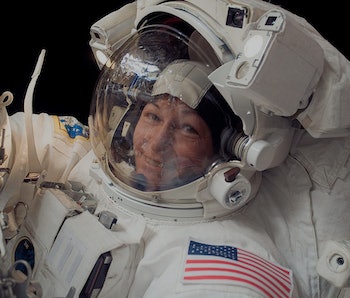 NASA astronaut Peggy Whitson launched towards the International Space Station in November on track to break the record for most time spent in space by an American. Not content to merely surpass Jeff Williams’s standing record of 534 cumulative days, she has signed on to extend her ISS mission by three months, NASA announced Wednesday.

“This is great news,” Whitson said in a statement. “I love being up here. Living and working aboard the space station is where I feel like I make the greatest contribution, so I am constantly trying to squeeze every drop out of my time here. Having three more months to squeeze is just what I would wish for.”

Whitson already has a pile of records under her belt. In 2008 she became the first woman to command the ISS. On Sunday she will take charge again, becoming the first woman to lead the station twice. She has done more spacewalks than any other woman astronaut.

On April 24 she will break Williams’ record as anticipated. But rather than leaving in June, she will leave in September. The exact departure date is not yet set, but she is poised to smash the record by well over 100 days.

The trip extension was made possible by a change to the Russian space plan that will see two rather than three Russian cosmonauts aboard the ISS until late 2017 or early 2018. State space agency Roscosmos hopes to save money as it plans the launch of the Multipurpose Laboratory Module, a bus-sized science lab that will attach to the ISS.

With fewer Russians traveling to and from the space station, a seat has opened up on the September return flight to Earth. NASA seized the opportunity to make a deal for Whitson snag that spot.