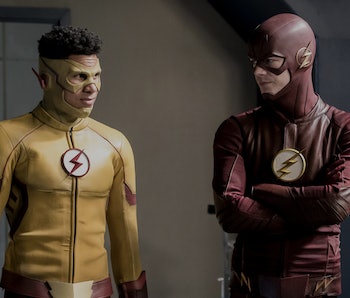 Just because Savitar wants to kill Iris West doesn’t mean The Flash is all grim and dark. In this week’s episode, “Cause and Effect,” the threat of Savitar eases up to let The Flash actually have some fun. A laugh-out-loud courtroom scene, and insight into Barry Allen’s nerdy childhood, bring some levity to what is shaping up to be the darkest chapter of The CW series yet.

“Cause and Effect” continues right where last week’s episode left off. An exposition-heavy opener explains Savitar’s true identity as a future time remnant of Barry Allen (Grant Gustin), who begrudges his lost life. Apparently, after Future Barry uses a bunch of time remnants to defeat Savitar, one of them lives and is rejected by Team Flash as a “forgotten” hero. That Barry then becomes Savitar, completing a paradox not dissimilar from the chicken and the egg cliché.

In an effort to roadblock Savitar, Cisco (Carlos Valdes) comes up with a brilliantly flawed idea to tamper with Barry’s brain, but — naturally — things go wrong, leaving Barry Allen with bad amnesia. Barry doesn’t remember a thing: Not Iris, not his own name, and not the fact that he has superpowers.

Savitar loses his memory, too, but it’s barely a dent in keeping the God of Speed at bay. With Wally West (Keiynan Lonsdale) de-powered and Central City in need of Barry Allen, as both CSI and the Flash, S.T.A.R. Labs briefly reunites with Killer Frost (Danielle Panabaker) to restore Barry’s memory. A C-plot involving a D-rate villain, Heat Monger (genderbent to a middle-aged dude) is also at play, but it’s just the fireworks for when Barry inevitably regains his memory.

Things sound dark, but “Cause and Effect” often feels like a throwback to the show’s earlier, brighter seasons. While The Flash has been engulfed in some of the darkest storylines in the show’s history, “Cause and Effect” gives some much-needed breathing room. Grant Gustin gives “Bart” Allen (comic folk will recognize that name — it’s Impulse!) a higher-pitched voice while Cisco and Julian (Tom Felton) are on fire in their subtlety as an oddball pair. A courtroom scene in which Barry Allen has to testify against Heat Monger is unexpectedly funny, even while Savitar looms somewhere, just out of sight.

The show further explores some corners into Barry’s life — fans will love that Barry Allen was a Dragon Ball Z nerd — while giving new depth to things like his relationship with Iris and even his seemingly tired tragic backstory. Aside from the opening scene, there isn’t a terrible amount of Savitar, which is fine. Learning that Savitar is a time remnant is enough serious business for one episode. It’s about time The Flash learns to be fun again.