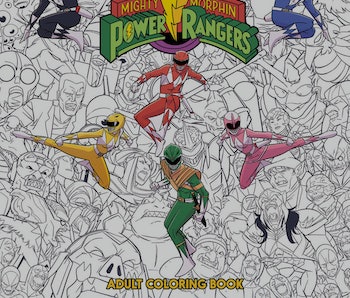 Ever wondered if the Red Ranger would look pretty — in pink? Well, now you can. BOOM! Studios, the publishers behind the surprisingly exceptional Mighty Morphin Power Rangers comic book, will be releasing an adult coloring book this fall featuring six Angel Grove teenagers with attitude.

Unlike the coloring books of your childhood, BOOM!’s adult coloring books will feature complex black-and-white drawings based on illustrations and variant covers from the comic book series. You’ll basically act as your own inker for art from Hendry Prasetya (DC’s Power Girl), Jamal Campbell, and Goni Montes, all of whom have contributed art to the comic.

This year has been quite the resurgence for everything Power Rangers. The coloring book hits shelves on August 30 in comic shops and September 5 in bookstores. The poster book will be released in September, while Mighty Morphin Power Rangers: Year One will be out just in time for New York Comic Con, on October 4.

Check out the books below.

More like this
Science
6.30.2022 10:30 AM
Look: 10 jaw-dropping images reveal nature running wild in cities
By Jennifer Walter
Mind and Body
6.23.2022 1:15 PM
7 trippy optical illusions that reveal how your brain perceives reality
By Jennifer Walter
Entertainment
6.24.2022 11:15 AM
Behind the scenes at “Herogasm,” The Boys’ most NSFW episode ever
By Aaron Pruner and Jake Kleinman
Related Tags
Share: