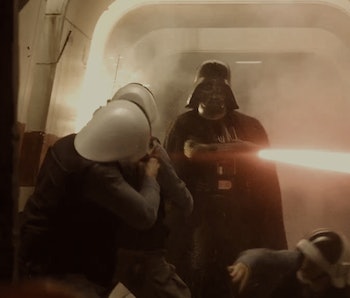 The iconic John Williams Star Wars theme did not play at the beginning of Rogue One: A Star Wars Story, but in one alternate universe, it did, and the movie felt completely different. A new fan edit of Rogue One has accomplished what some might say Lucasfilm didn’t: a cut of the film that captures the tone and flavor of the classic movies.

On May 4, Dustin Lee of Maple Films released his fan cut of Rogue One, titled Star Wars Rogue One: The Battle of Scarif. “When I dropped certain music tracks on top of scenes,” Lee told The Verge, “it was surprising how little trimming I had to do at times.” Instead of a two-hour film, Lee created a 50-minute action movie that is focused only on the Rebel Alliance trying to keep itself together and the ensuing battle both above and on the planet Scarif. And the aesthetics Lee used to create his custom cut were drawn directly from the classic trilogy.

Michael Giacchino’s unique and excellent score is replaced here by more classic John Williams tracks. Notably, the first Star Wars film didn’t use the “Imperial March” theme, because at that time, John Williams hadn’t composed it yet. And so, when Lee splices some of the other A New Hope incidental music representing the Empire, the effect immediately makes the footage feel more retro.

Lee also employs old-fashioned wipes and dissolves for scene transitions, remaking Rogue One with a gauzy fairy tale feeling as opposed to the grittier aesthetic of the actual film. It might not be better than what Gareth Edwards intended, but it it does certainly feel more like an old Star Wars film. Much has been written about the ways in which the original Star Wars worked, but at least part of the triumph of George Lucas’s original film was connected to the John Williams music.

In the 1983 biography Skywalking, author Dale Pollock reveals that though George Lucas was discouraged by early cuts of Star Wars in 1976, his experiences recording the score with John Williams changed his feelings and gave him hope for the film. “The music’s impact was immediate and dramatic when incorporated into the film,” Pollock writes and further notes that early viewers of the film felt that the score gave “the hokey characters dimension.” It’s no surprise layering Williams score directly with Rogue One footage creates a similarly transformative feeling.

Watch the opening crawl for the Rogue One fan edit and judge for yourself:

The entire 50-minute fan-edit — Star Wars Rogue One: The Battle of Scarif — is available for download on Lee’s MapleFilms.com. At present, Lucasfilm has not taken legal action.