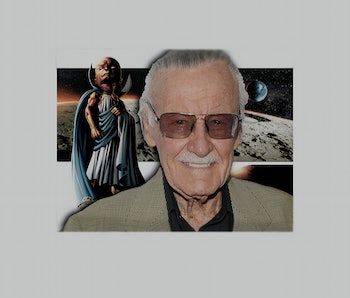 No Marvel movie is complete without an appearance of the Generalissimo himself, Stan Lee. James Gunn’s Guardians of the Galaxy Vol. 2 is no different, with the famed comic book creator appearing in two scenes in the latest sci-fi action movie from Marvel Studios. Unlike his previous appearances, however, Lee’s cameo strongly suggests a unified continuity, one confirmed by none other than Kevin Feige himself: All this time, Stan Lee has played Uatu, and the incredibly disinterested aliens he’s talking to are the Watchers.

It’s all very meta because Lee and legendary comic book creator Jack Kirby created the Watchers together in 1963 for Fantastic Four #13. In the Marvel Universe, the Watchers are an alien race (obviously), one of the oldest in the cosmos, who work to observe and compile all knowledge. Their policy of “non-interference” — similar to the Prime Directive in Star Trek — derives from an incident in which the Watchers gave knowledge to a primitive society called the Proscilians. The Proscilians proceeded to obliterate themselves with nukes and weapons derived from the Watchers’ knowledge, and so the Watchers took a vow to never interfere again.

The first Watcher to appear in comics was Uatu, who was assigned to Earth and revealed himself to Marvel’s first family, the Fantastic Four. Since then, various Marvel heroes have come in contact with Watchers; one appeared in the very first issue of Marvel’s pivotal event series, Civil War written by Mark Millar in 2006. In 2014, Uatu the Watcher was mysteriously murdered, kicking off an investigation by Nick Fury in Jason Aaron’s Original Sin.

In an interview with Screen Rant, Feige said that Stan Lee’s cameo in Guardians of the Galaxy Vol. 2 confirms he has been playing the same character all this time. “Stan Lee clearly exists, you know, above and apart from the reality of all the films,” Feige said. “So the notion that he could be sitting there on a cosmic pit stop during the jump gate sequence in Guardians was something very fun … [W]e thought it would be fun to put that in there because that really says, so wait a minute, he’s this same character who’s popped up in all these films.”

In his cameo, Stan Lee talks about being a FedEx agent on Earth, which references one of his previous appearances in Captain America: Civil War. The Watchers, bored, walk away in one of the five post-credits scenes to Guardians of the Galaxy Vol. 2. But something tells us they’ll be back when the Infinity Gems start coming into play.

Guardians of the Galaxy Vol. 2 is out now in theaters.