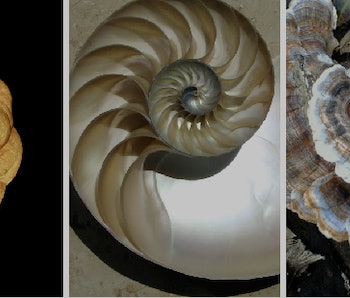 We humans on this oblate spheroid planet are surrounded by other spherical objects, both natural and manmade. From the Olympic rings to the rings on a tree stump, our lives are surrounded by circles. This is not a coincidence: Scientists believe that the frequency of circles in nature has influenced their permanence in the manufactured realm. In a new book, appropriately titled The Book of Circles, data visualization researcher Manuel Lima explains that circles are a 40,000-year-old human fixation because we are especially compelled towards the shape.

“It goes back to primitive roots in nature, where more shapes are curvilinear,” Lima, who works as a designer for Google, told Co.Design. “They’re softer, they provide some safety, as opposed to angular shapes — the teeth of an animal, the hard shape of a rock. Those are signifiers of danger.”

Some scientists believe our preference for circles is likely rooted in the evolution of the brain to pay more attention to smooth, rounded shapes. A curvy body to mate with or a round animal to eat is more important to notice than, say, a pile of jagged rocks, so the brain, by necessity, devotes more of its processing attention to those objects.

Researchers have confirmed our bias for roundness in a variety of studies, such as one where brain scans revealed that there’s higher activity in the brain when people walk around a room full of curvy items versus a room filled with sharp-pointed objects. A separate 2013 study, published in PNAS, found that participants were more likely to judge rooms as more beautiful if they were curvilinear rather than rectilinear and brain scans of the participants showed that the regions connected to emotional processing were activated more when participants were in the rounded rooms. This proved true for both men and women — dispelling the idea that it’s only guys who are drawn to curves.

Other research has found that our brains feel safer around circular objects. This is unusual because the things that typically scare us are the things our brains spend more time paying attention to. In 2007, scientists publishing in Neuropsychologia found that the presence of sharpness activated the amygdala — the part of the brain that processes threat. The amygdala’s response to curves, however, suggested they were less threatening.

In other words, curves are safer, which brings a whole new meaning to the song Hips Don’t Lie:

More like this
Science
8.4.2022 6:15 PM
3D analysis reveals a key similarity between dinosaur and bird embryos
By Charles Q. Choi
Science
8.1.2022 10:30 AM
These 6-million-year-old teeth may be from Europe’s last panda species
By Elana Spivack
Science
7.31.2022 1:00 PM
How do cats co-exist with each other? The answer may lie in their gut
By Tara Yarlagadda
Related Tags
Share: