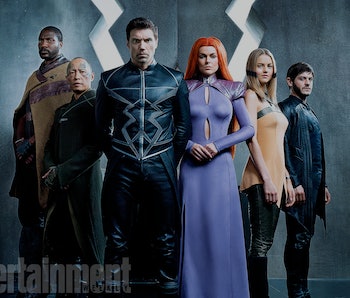 Marvel’s plan to adapt Inhumans, one of the publisher’s more confusing comic franchises, came to a halt years ago when a planned movie was removed from the MCU film slate. Surprising everyone, Marvel then announced it would move forward with Inhumans, this time as a TV show on ABC, one that will air its premiere episode in IMAX theaters across the country. On Thursday, we got our first look at the family Inhumans follows, and that first photo is a mixed bag.

In an interview with Entertainment Weekly, showrunner Scott Buck (who notably also ran Iron Fist) says he plans to make these extraterrestrial superheroes both fantastic and grounded. “We approach these all as real people who just happen to have these abilities,” he says, “so they’re all very grounded people. We try to write them as real as possible, and then have fun with the powers when we can. We want their powers to seem like a very natural part of their personality.”

When EW dropped a photo of the characters, however, fans on Twitter were less than thrilled. Medusa’s cheap-looking wig was a big sticking point.

So what’s the deal with this adaptation of Inhumans? Check out what people are saying on Twitter and decide how you feel about this version for yourself.

The first two episodes of Inhumans will premiere in IMAX on September 1, 2017. The rest of the show will air on ABC this fall.