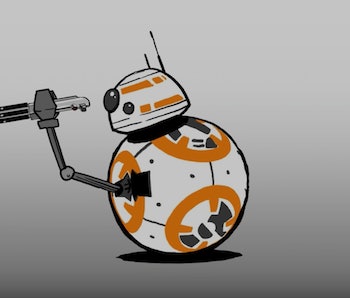 May 4 (May the Fourth be with you!) is the best of all corporate holidays, started by fans of Star Wars for its play on words and the opportunity to wear a Darth Vader costume to work. In the hours ahead of the day that Disney has branded “Star Wars Day,” BB-8, the most lovable of all droids, is in a new video, dangerously fooling around with a blue lightsaber. Classic BB-8, you might say.

The 39-second video, uploaded on Wednesday, features the scene-stealer from The Force Awakens nearly slicing itself in half before the ground beneath it gives out.

It appears to be the first in what might be a series of animated shorts called “Star Wars Blips.” It is a delight. It recalls the classics of Warner Bros.’ “Looney Tunes.” The clip is whimsical and cute, bursting with droid personality; it carries more emotional punch than any prequel.

Also: This is thankfully free of the very serious, very important question of canon or drama or anything resembling a spoiler. Instead, it’s BB-8 perilously screwing around with the lightsaber. All you need to do is roll your eyes or scold it when things get out of hand.