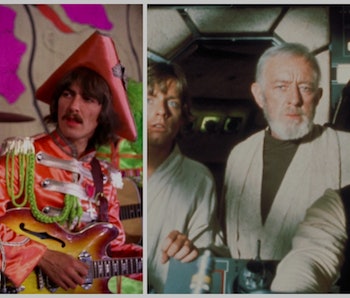 Traveling through hyperspace might require precise calculations to avoid flying through a supernova, but recreating rock music from 1966 might be even more difficult. Turns out the musicans behind the new Star Wars/Sgt. Pepper’s mashup used more than just the Force to simulate the authentic sound of the actual Beatles.

On Tuesday, the music comedy duo Palette-Swap Ninja took the internet by storm with their album-length music video mashup “Princess Leia’s Stolen Death Star Plans.” Going track-by-track through the Beatles album Sgt. Pepper’s Lonely Hearts Club Band, Palette-Swap Ninja convincingly makes you believe the actual Beatles time-traveled to 1977 and recorded an alternate version of their famous album that matches the plot of Star Wars. In real life, Palette-Swap Ninja has just two musicians: Jude Kelley and Dan Amrich. So how did they simulate the sound of the actual Beatles so precisely? The duo reveals they did it from “scratch.”

“When we do parody songs, rebuilding similar-sounding tracks is part of the fun and challenge for us,” Palette-Swap Ninja tells Inverse. “We learn a lot by doing it that way.” For their daring Star Wars/Beatles project, the group used at least one of the exact same type of musical instruments used by the Beatles in 1966, specifically “a Gibson G101, the same model organ the Beatles used on ‘Lucy in the Sky With Diamonds.’”

But when Palette-Swap Ninja couldn’t use an original Beatles instrument, they figured out how to simulate those instruments digitally. “For the guitars and bass, Dan mostly used a Line 6 Variax 500 guitar and Variax 700 bass, which are both a few years old,” they explain. But, just because the guitar and bass were contemporary, by using some of “Logic Pro X’s digital guitar amps and effects,” it was possible for Palette-Swap Ninja to create digital versions of vintage instruments, like “the Epiphone Casinos that John and George used on a lot of the album, and a Rickenbacker 4001 bass with flatwound strings, which was what Paul played on Sgt Pepper.”

Palette-Swap Ninja also reveals the entire concept came at the suggestion of Dan Amrich’s wife Katrin. The entire process ended up taking five years. “It took a lot of work to put the right parts in order,” they explain. “But five years later, Katrin had the right idea from the beginning!”

Listen to more of the album here.