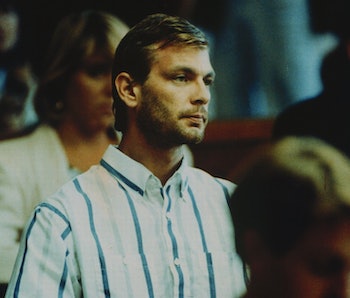 On July 22, 1991, 32-year-old Tracy Edwards, wearing a pair of handcuffs, flagged down two policemen in Milwaukee. He told them he had been imprisoned for hours by a man who had told him he was going to eat his heart, but he had escaped. The police followed Edwards’s directions to Jeffrey Dahmer’s apartment.

Dahmer welcomed the police officers into his home and only became agitated when they found his Polaroid collection, which pictured human bodies in different states of dismemberment. He fought the officer holding him back until Officer Rolf Mueller opened the fridge and found the head of a young black man sitting on the bottom shelf. Dahmer collapsed at this, murmuring, “For what I did, I should be dead.”

Jeffrey Lionel Dahmer, one of America’s most infamous serial killers, was born in 1960. Before his name was recognized around the world, he was simply a student at Revere High School in Ohio, the public school also attended by indie comix creator Derf Backderf. Backderf actually knew Dahmer, in a complex and tragic way outlined in his incredible graphic novel, My Friend Dahmer, which he began writing upon news of Dahmer’s arrest in 1990 and originally published in 2002. The book was nominated for several prestigious comics awards, including an Eisner, and has been adapted into a film which premiered at the 2017 Tribeca Film Festival.

Speaking over the phone with Inverse, Derf says watching his comic adapted into a film is just “another weird events in a series of weird events which began back in 1990.” In Derf’s book, we see him learn that a fellow Revere High alum has been arrested for serial murder. When he tries to pick who it had to have been, his first guess, stunningly, is not Jeffrey Dahmer, but it’s clear Dahmer was always considered strange, if not outright threatening.

I was so affected by the moment at the end of the book, where you’re told someone from high school is a serial killer, and Jeffrey Dahmer isn’t your first guess — what was going through your mind then? Were you still pulling for him to turn his life around?

When my friends and I would get together, his name might come up. He literally did just drop off the face of the Earth. It was like he vanished. We were a little curious, but I can’t say I spent a lot of time thinking about him.

You include several scenes in your comic featuring Dahmer when he’s alone. How did you allow yourself to take some liberties, as a writer?

I didn’t do it a lot, but those scenes come from Jeff himself. It’s all footnoted in the back with the source material, I didn’t just make stuff up. I based his moments alone on things Jeff said. The dog in the woods, or the jogger scene, they’re such key points in his spiral down that I felt I had to include them. But he’s alone, because they never came to fruition. He described them in so many interviews and the stories never varied. You can lose control of a lie, but I was comfortable with those scenes.

The parameters for the book: It’s the perspective of a contemporary.

There’s an archetype being built for American serial killers and kids who conduct mass shootings: they’re lonely, frustrated young white kids, mostly, and they feel that they’re not represented or not getting enough attention. Do you think it’s a specific kind of isolation that happens to these kids?

I don’t know. I think they’re all unique. I’m not a psychologist so I can’t really even venture to make a case. In Jeff’s case, certainly, the isolation was a big deal. Adam Lanza, Jared Lafner, they all make comments on how they were treated or not treated. As far as their motivation, I think they’re all pretty unique.

It can be a part of mental illness, where you cut yourself off from the world around you, and I guess isolation lets some things breed that way.

Do you feel any guilt, having known Dahmer was a strange dude?

Not so much guilt. It’s more like … regret. There’s a sadness to the book that was very much part of how I regard the story. But guilt? I mean … we’re talking about the 16- and 17-year-old kids we were at the time. What were we supposed to do? I ask this all the time: Where were the adults?

Ultimately, it’s a story about failure, because everybody fails. Jeff himself failed, spectacularly.

Most of your books are set in areas like the one you grew up in. What is it about the Rust Belt that keeps inspiring you?

I mean, that’s my thing, I guess. Nobody else is really writing about this place. In France, for instance, they’re fascinated with the concept of the Rust Belt. Everything coming out of the states tells these stories about, like, Texas. It’s colorful. But then, here you’ve got these rusty, planky little stories.

I get questions like, how is a place like Akron allowed to happen? And I mean, I dunno, it just happened. Towns that were raped by Wall Street, just molested on the side of the road to die. I guess telling stories about these places is just my thing. I’m the Rust Belt cartoonist.

So what do you think people assume about the middle of the country that isn’t true?

That we’re a bunch of rubes.

You know, it’s just like anywhere else. It has its own vibe. Maybe people think it’s not an interesting place. It’s overlooked in media, and in a lot of fictional stories. Honestly, we’re fine with that. We don’t to become Portland or Seattle. But eventually, when the seas rise and swallow New York and all these places that are too expensive, people are gonna look at these old Rust Belt towns that are high and dry.

Has it been strange to see a comic about your adolescence turned into a movie?

I can’t say that I enjoyed this process, but I didn’t not enjoy it. It’s just another weird thing.

The movie is for people who wouldn’t deign to open a comic book. Americans can be kind of privative about comics. Maybe people will find their way back to the book, that’s always the hope.

I mean, some of the performances are astounding, and a lot of the scenes are straight out of the book. Alex [Wolff] did a pretty good job with my character, considering the book doesn’t give him much to work with. He’s a little cooler than I was in high school, but he gets across the smart ass subversive that I was. And, he has that growing unease with Dahmer.

So watching the film was complicated for you.

You know, I’ll say this: the first time I saw the movie, they sent me a screener online. I watched it in my studio, with the shades drawn, by myself, because I thought it would be really hard to get through. I got to the end and thought, “Oh, that wasn’t so bad.” But then I noticed I was just drenched in sweat. I guess it affected me on a visceral level rather than a logical one.

My Friend Dahmer, the graphic novel, is available now from Abrams book. The film adaptation does not currently have a wide release date set.

More like this
Entertainment
6.21.2022 12:15 PM
Ethan Hawke is an instant iconic horror villain in The Black Phone
By Eric Francisco
Entertainment
6.19.2022 11:30 AM
You need to watch the best monster thriller of the '90s before it leaves HBO Max next week
By Mónica Marie Zorrilla
Entertainment
6.24.2022 11:15 AM
Behind the scenes at “Herogasm,” The Boys’ most NSFW episode ever
By Aaron Pruner and Jake Kleinman
Share: