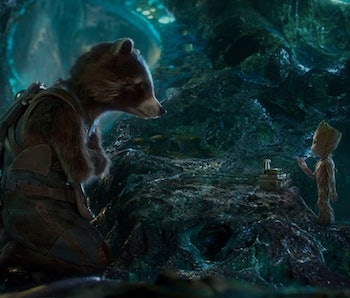 When Guardians of the Galaxy premiered in 2014, five little-known Marvel characters were thrust to the forefront of the MCU franchise. It turned out that people really liked this swaggering, dysfunctional group of a-holes who were, to the confusion of many, somehow connected to the Avengers. But only one of the Guardians was loved, adored, and memorialized in fan art across the internet to a truly ridiculous level. His being miniaturized at the end of the movie didn’t help matters at all.

The people want more Groot. Clearly, Marvel realizes this now, as the majority of their marketing for Guardians of the Galaxy Vol. 2 has centered around Groot being a cute baby who needs to be coddled. The scene with Rocket trying to explain how the “death button” works to Groot while Groot keeps getting the instructions wrong? That’s pure understanding of Groot’s marketability on Marvel and Disney’s part.

He’s cute, he’s funny, and he’s easily 60 percent of the reason why people love Guardians so much (which is totally a scientific fact). So, where’s the Groot and Rocket origin story movie?

Vol. 2 is probably about 40 percent Groot (also a scientific fact). Rocket splits the responsibility of raising Baby Groot with the rest of the Guardians throughout the film, which has gotten relatively pleasant reviews so far. It’s just not as great as the original, so say the critics.

Maybe that’s because it’s not really an origin story anymore, which is exactly what the first Guardians was: an origin story about how the Andromeda galaxy’s greatest a-holes banded together. Star-Lord, Gamora, Drax, and even Rocket Raccoon all got some backstories, no matter how frail, in Guardians. Groot did not. But Groot might have the most interesting origin story of all.

See, Groot is kinda-sorta a king. Maybe. In one version of Marvel’s comics, Groot comes from what’s described as an “Ennobled Sap-line.” But he also might just be pretending and impersonating the rightful monarch of his home planet, Planet X, which is where the giant, sentient tree species Flora colossus hails from. If he were king, his full title would be: His Divine Majesty King Groot the 23rd, Monarch of Planet X, Custodian of the Branch Worlds, Ruler of all He Shades.”

And that’s, like, a really interesting origin story. Rocket and Groot currently have their own comic series with Marvel, appropriately titled Rocket Raccoon & Groot, that details the duo’s adventures outside the realm of the Guardians. Rocket goes to the dark side for a while, they play around as Vikings, the two compete in an intergalactic football league, you get to meet Rocket’s former mentor, and they find themselves involved in the Civil War II storyline alongside Gwenpool. It’s still ongoing and, yes, it’s a lot, but it’s also prime for a goofy spin-off film for a talking tree and anthropomorphic raccoon.

So, even though Marvel already has, approximately, the next century of its movies planned out and James Gunn is already confirmed as returning for Guardians of the Galaxy Vol. 3 after the Guardians have participated in both Avengers: Infinity War and Avengers 4, the franchise should probably consider a Rocket and Groot standalone movie. In fact, Vol. 3 should just be that movie. Because the world needs a Groot origin story for the big screen, and Groot sans Rocket just feels wrong at this point.

Guardians of the Galaxy Vol. 2 (with that aforementioned 40 percent Groot content) premieres in theaters May 5, 2017.