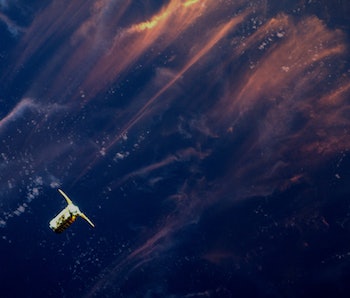 It was a sight to see as the Cygnus supply ship approached the International Space Station above a hazy blue Earth, glimmering in the last rays of the sun as it set on the horizon.

Orbital ATK’s Cygnus was launched via a United Launch Alliance Atlas 5 rocket on April 18 and Cygnus arrived three days later, carrying with it 7,600 pounds of cargo, including equipment for 200 science experiments. One of the most notable parts of the experiment is the first-ever DNA sequencing project, which will help scientists in orbit study samples, identify microbes, diagnose disease, and even help the ISS crew monitor their own health, which changes quite a bit in space as proven by American astronaut Scott Kelly.

The beautiful photo was taken by Thomas Pesquet, the European Space Agency’s flight engineer, using the space station’s Canadarm2 — a robotic arm that latches onto payloads and pulls them up to the ISS. The Canadarm2 has four color cameras, two on the “elbow” of the arm and two on its hand.

The arm pulled the Cygnus in, arriving safe and sound with essentials for the crew.

More like this
Science
8.12.2022 10:00 AM
45 years ago, the first Space Shuttle made history without going to space
By Allie Hutchison
Innovation
8.9.2022 2:00 PM
A small robot on the ISS will practice performing surgery in space
By Doris Elín Urrutia
Science
8.2.2022 6:15 PM
Behold! New Webb image reveals a dynamic and "rare" galaxy
By Doris Elín Urrutia
Related Tags
Share: