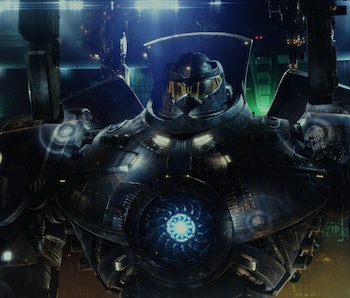 Gipsy Danger being dragged into the sky by a winged Kaiju wouldn’t have been that big a problem if Gipsy could fly. It seems the minds behind Pacific Rim: Uprising, the sequel to Guillermo del Toro’s 2013 Rock’em Sock’em Robots-meets-Godzilla masterpiece, agree with the sentiment. Designs for the Gipsy Danger follow-up Jaeger, Gipsy Avenger, have been revealed and they include some much-needed upgrades.

Bandai’s Tamashii Nations New York event on Saturday revealed some new toy designs, but that’s definitely not what Pacific Rim fans were excited about. Hidden amongst the action figures was a photo detailing the design and features of “Gipsy Avenger,” a Mark-VI Jaeger. It’s got the same beautiful fierceness as Gipsy Danger, Raleigh Becket and Mako Mori’s now-destroyed Mark-III Jaeger, but with a much sleeker shell.

The design details an “Elbow Rocket 2.0” and a “Chain Sword 2.0,” which means Mako and Raleigh will definitely be tearing up Kaijus and pummeling them in the sequel. But the most important detail is on the right shoulder of the mech: “Airborne Launch System.”

While no details about what exactly that means for Gipsy Avenger’s abilities once Raleigh and Mako are drifting, there’s a pretty good chance it means Avenger can fly. Like, actually fly. So, at least they’ll be prepared for when a Kaiju unexpectedly unfurls massive wings and takes them into space this time.