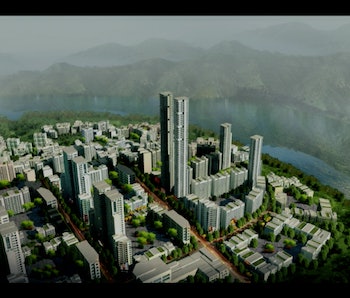 The world will add four billion more people by the end of the century, and over 70 percent of them will live in cities. Accommodating that swell will be the mission for generations of urban planners, as they will be forced to reshape city grids to make the most of limited space.

What won’t help the space crunch? Autonomous cars. That’s the opinion of Peter Calthorpe, a 30-year veteran of urban design, who during a Wednesday TED Talk in Vancouver wasn’t confident self-driving cars will be the answer.

While self-driving cars could create a reduction in the number of cars on the road, they will inevitably create more “moving miles.” That is, people will be inclined to use cars to travel longer distances and that will only exacerbate urban sprawl and the problems that come with commuting.

Calthorpe fears what might happen if people choose to forego ridesharing in favor of privately owned autonomous cars, which he says surveys suggest will be the case.

“If [people] don’t share [these cars], you can end up with a 90 percent increase” in total miles driven.

Even if self-driving cars are shared by more than one person — a future being forecasted by everybody developing autonomous cars, including Elon Musk — there is still a 30 percent increase in those “moving miles,” Calthorpe projected.

Calthorpe and his firm worked with city planners in Jinan, China, a city of over 4.4 million, to create designs to make better use of the city’s underdeveloped spaces. A third of the Chinese population uses cars to travel, and it’s contributed to a spike in motor vehicle-associated deaths, pollution, and congestion.

Calthorpe and his team created a concept for an increased “green edge” of forest by the water to preserve ecological features, instead of simply bulldozing and leveling sites to prop up new buildings. In addition, more walking and biking paths were created out of street space.

“If only one-third of people have cars, why give 100 percent of the street space to cars?” he said.

To that end, Calthorpe lists seven guiding principles he has used during his work and research into the future of Chinese urban development, and thinks they can apply to most places around the world:

Calthorpe hopes these lessons can help the world avoid an epidemic of global sprawl, and turn cities into zones of cosmopolitan efficiency and high living. We’ve got 86 years to work on it.