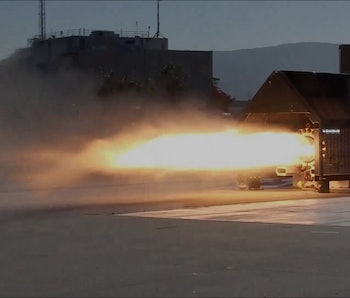 It turns out that the same ingredient found in our beloved childhood crayons can actually fuel rockets and propel them three times faster than traditional fuels.

The fuel is derived from paraffin wax and nitrous oxide and is being used for the first time in a Peregrin hybrid rocket. The project is a team effort between Stanford University and NASA; the rocket successfully passed its final ground test on March 25.

Now, one month later, the results have proven that the fuel can offer a stable combustion system, one that is non-toxic so it’s easy and safe to transport, and works more efficiently in a compact motor, thrusting the rockets at a much more powerful rate. The fuel is a solid and liquid hybrid, so it also has less explosive potential than all-solid or all-liquid fuels. To top it off, the paraffin fuel works really well under colder, harsher conditions — like, ahem, Mars.

With all these amazing new capabilities, NASA is eager to use the fuel on the Mars Ascent Vehicle, which will collect samples of the surface and shoot back up to an orbiter that will analyze the chemical makeup and help scientists figure out how the heck we’re going to live there one day.

The Peregrine rocket will be tested in flight for the first time sometime later this year at NASA’s Wallops Flight Facility in Virginia. Who would have thought that those crayons we once used to draw rockets and spaceships would actually be used to fuel them one day?