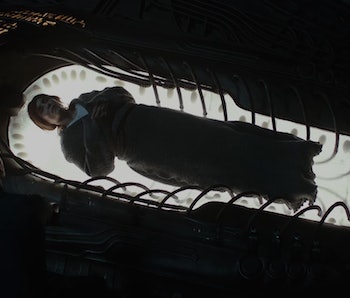 After Prometheus, Dr. Elizabeth Shaw and the android David hijacked one of the Engineers’ dreadnaught starships, and now it’s been revealed what happened right after that.

On Wednesday, at the end of a special Alien Day livestream, director Ridley Scott introduced new footage from Alien: Covenant which promised not to spoil “too much” but actually showed quite a lot. Right now, this footage is being referred to as a prologue, which seems to imply it won’t actually be in the final film. But, the footage does reveal exactly what became of Shaw and David after they went out into the stars with the Engineers’ ship.

Narrated creepily by David (Michael Fassbender), we learn that Dr. Shaw gave David a new body by somehow using materials on the advanced spacecraft. The shot of her fixing his robot body is positively Frankenstein-like. These two characters seemed to develop some kind of friendly bond after the events of Prometheus, which is funny since David basically infected Dr. Shaw with an alien squid baby that tried to eat her in the last movie.

The footage wraps up with David putting Shaw in suspended animation for the remaining duration of their voyage, which seems to conclude with their ship arriving at the home world of the Engineers.

Here’s where everything gets ominous, and David steps forward in what appears to be the much-discussed big scene in which he carpet-bombs a planet with black-goo pods.

Here, the new footage ends just with David looking intent on doing something awful. The clip stops without revealing what happens. Presumably, it will be shown in Alien: Covenant.