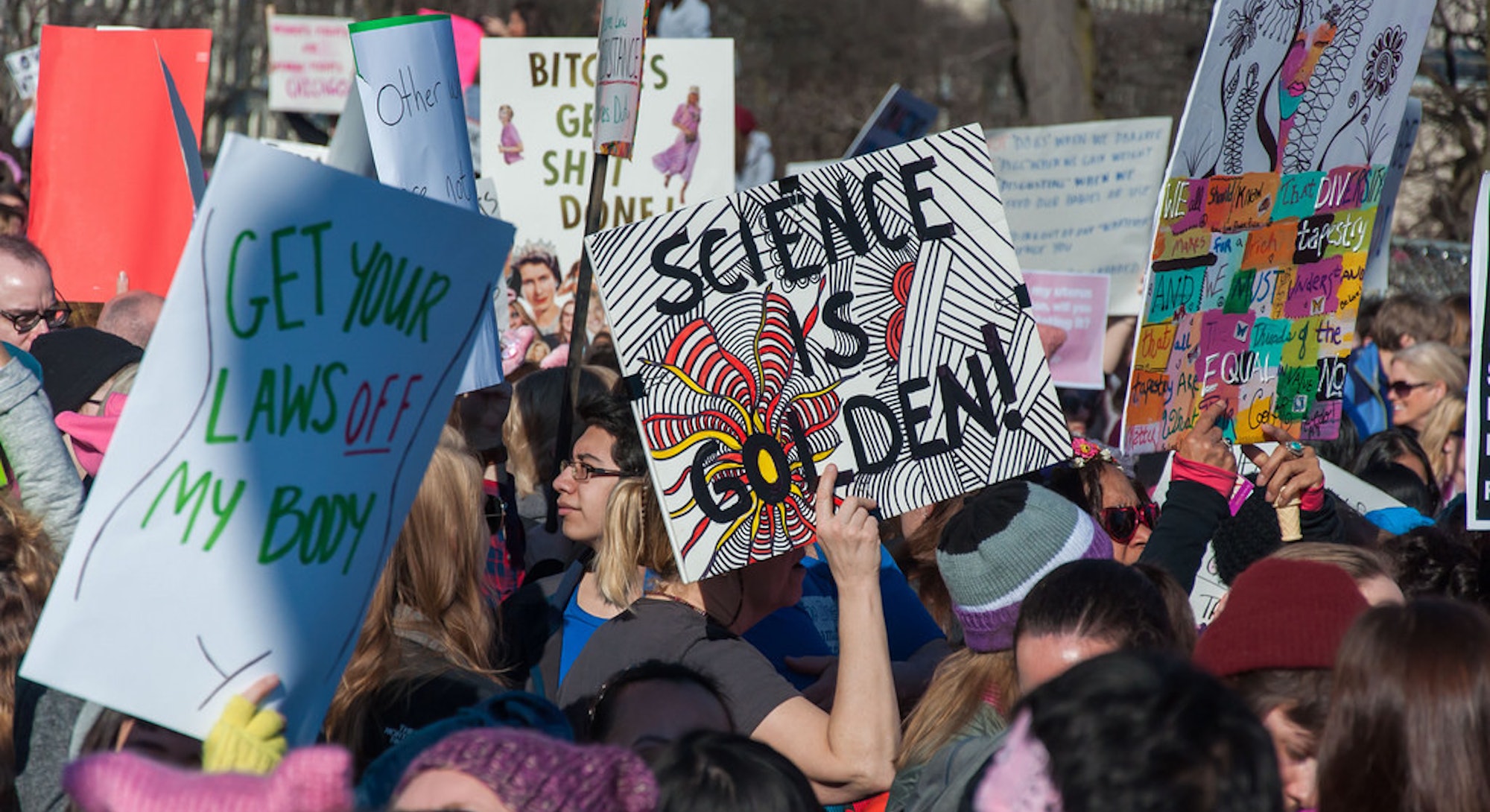 One of the biggest debates at Saturday’s worldwide movement to March for Science in defense of the field was the fact that a march, inherently, implies some form of partisanship and politicization of a field whose pursuit revolves around testing and truth based on fact. Prominent members of the science community — such as cognitive scientist Steven Pinker — lashed out at supporters and organizers of the March for its positioning as a sort of counterculture movement against President Donald Trump’s administration and its seeming stance as a liberal force.

So was the March for Science a blatant declaration of the politicization of science?

Brian Huber, a paleobiologist at the Smithsonian’s National Museum of Natural History who studies planktonic foraminifera, or tiny-shelled organisms that compose the body of shells, was at Washington, D.C.’s March for Science. His research may seem arcane and obscure, but Huber’s work has incredible importance: Foraminifera collect in marine sediment and are key indicators of how environments change over time.

“The deposits in the oceans millions of years ago tell geologic time and [we] analyze shells to reconstruct temperature through time,” he tells Inverse through a steady drizzle. “The shells record the temperature in the isotopes from the mineral, from really deep time. We get a good sense of the natural changes, what the forcing mechanisms are, what the effects of those are on life, on atmospheric circulation, on oceans.”

In other words, Huber’s field of study is one of the key ways scientists have been able to trace the last 115 million years of climate and how drastically, harshly, and dangerously it’s changed.

Which puts Huber in an odd position when he faces people who deny climate change as a phenomenon. Huber is mild-mannered, but he sort of winces when I mention climate change deniers. “It’s based on belief, not facts,” he says carefully. “From melting glaciers to the study of ocean sea level to real temperature change through time are all saying the same thing: The Earth is warming, and it’s warming at a fast rate.”

On Friday, the conservative Heartland Institute sent a statement composed of fellow stances disapproving of the “politicization” of science with the March for Science. Among the comments:

“I am truly sorry to see a ‘March for Science’ mixed up with all this. It is likely to hurt science and scientists by painting them as purely partisan and political.”

“When I was a child, Earth Day was a day to take my little red wagon along the county highway I grew up on and pick up litter. Now it seems the politicization of every facet of our lives is complete. Anti-Trump demonstrations masked as a supposed ‘March for Science’ are planned in multiple cities across the country – although it is fair to question the dedication of these protesters to the pursuit of scientific truth instead of simply showing they are part of the #resistance.”

“As we prepare for the celebration of Earth Day, I pause to count the blessings that mother earth provides for us. Spring has arrived and the snow is gone, and we are beginning the planting season. So as I travel to the farm in my F-350 truck, I think of how the Earth has provided the energy to work the soil, coal for electricity, oil and gas for the making and use of machinery and fertilizers. We are blessed with the ingenuity to utilize all aspects of the resources provided to us. How wonderful it is to live in the modern industrial era.”

Climate change denial and the anti-politicization of science movement has a surprisingly broad political base that extends beyond the traditional construct of Republicans and includes a significant swath of the scientific community who either fear for their jobs or disagree with the positioning of science as a political force that is anti-Trump. “A march by scientists, while well-intentioned, will serve only to trivialize and politicize the science we care so much about, turn scientists into another group caught up in the culture wars and further drive the wedge between scientists and a certain segment of the American electorate,” Robert S. Young, professor of coastal geology at Western Carolina University, argued in a New York Times editorial in January.

Many federal government-employed scientists I tried to speak to hurried away when they found out I was a reporter and refused to speak even anonymously for fear of their jobs; one woman said, “You’ll be lucky to find anyone here from the EPA who will talk to you.” Other scientists have taken issue with the March’s internal politics, including accusations of muffling the voices of women and people of color, along with calls to skip the march as a powerful message that science’s purity as a non-partisan force is powerful in and of itself as a stance against federal cuts.

For Huber, however, that complacency doesn’t cut it. His research is direct proof of the existence of climate change, and it befuddles him to know that people don’t believe it’s happening. Huber’s entire career has been based on measuring sediment layers and the evidence is irrefutable — that science, pure fact, indicates that something in the climate has worrisomely changed since the mid-1800s, when the Industrial Revolution kicked off the “release of over 350 billion tons of carbon dioxide into the atmosphere, and half of that since the 1970s,” he says.

“When you consider that that CO2 is buried within the earth for hundreds of millions of years, a lot of it being pumped out in just a few short decades, how can you imagine that this will not affect our climate?”

At this point, Huber just shows me his sign, a neat but plain magic marker poster board simply declaring “Science-based decision-making is not partisan politics,” with the “is not” part written in red.

It’s not a particularly catchy sign or one that induces giggles — if anything, it’s earnest, sincere, and straightforward. “Scientists are not determinative,” he says. “We are looking for evidence. There’s always uncertainty and you have to deal with that uncertainty.

“We don’t have a political agenda,” Huber says plaintively. “Some critics will say, ‘Oh, you just want to increase your funding.’ Scientists are just looking for the answers. Pure science is not driven by any underlying agenda other than to predict better.”

“The kinds of cuts that are proposed are horrible for this country,” he continues. “It just represents a misunderstanding of the importance of science in our daily lives. The public needs to wake up and push back against this to make sure this doesn’t happen.”

Perhaps it’s fitting that as I ended my interview with Huber, Bill Nye took the stage, rousing the crowd with a growl: “Let’s go save the world!”