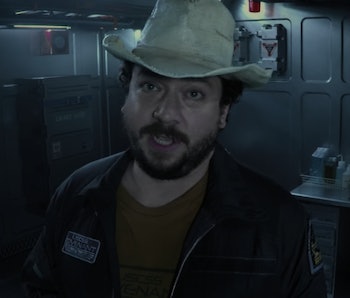 The crew of the Covenant were all permitted one last transmission home before going into hypersleep, and three newly revealed crew transmissions show the group’s uncertainty over their Alien: Covenant mission and, for one, a hilariously checkered past.

The next installment in Ridley Scott’s Alien franchise, Alien: Covenant, has been gearing up and introducing its new cast of characters via final transmissions before each crew member goes into their respective hypersleep chambers. Most of crew expresses excitement or nerves in their videos to family members and friends back home on Earth. But by far the most entertaining message Alien fans have witnessed so far is from the Covenant’s pilot, Tennessee ( Danny McBride).

In his video, Tennessee reveals that he’s surprised he was ever hired by Weyland due to being arrested three times, stealing a vehicle, and “punching a police officer’s horse in the mouth on St. Patrick’s Day.”

At the end of the video, though, Tennessee gets choked up over his younger brother growing older than him and about how he can’t wait to see “how big [his] boys will grow,” referring to his nephews.

Tess Haubrich’s Rosenthal speaks on how lonely she feels and pleads for her loved ones not to forget her.

Finally, Sergeant Lope (Demián Bichir), who’s tasked with protecting the Covenant’s crew and passengers, expresses concern with his small group’s ability to do their job. There are, as he points out, “so many unexpected variables.”