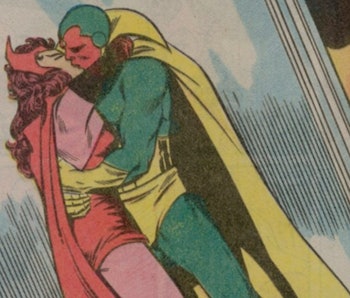 In the midst of fighting Thanos in Avengers: Infinity War, two Marvel heroes will finally share a long-awaited romantic moment. Elizabeth Olsen and Paul Bettany, who play Scarlet Witch and Vision, respectively, have reportedly filmed a kissing scene on the set of Infinity War in Edinburgh, Scotland. The romantic tension between the characters began in 2015’s Avengers: Age of Ultron and continued through last year’s Captain America: Civil War. Longtime Marvel readers will be excited to see these characters pair up because this ship dates all the way back to Roy Thomas’s run on The Avengers comics in 1970.

Scarlet Witch and Vision first met in The Avengers #75, and the pair soon became close. Their first kiss happened in issue #91 when they were losing a pretty bad fight to Ronan the Accuser, and they confessed their love for one another eight issues later.

In coming up with the seemingly unlikely pairing, Thomas said in a magazine interview: “I felt that a romance of some sort would help the character development in The Avengers, and the Vision was a prime candidate because he appeared only in that mag … as did Wanda, for that matter. So they became a pair, for just such practical considerations. It would also, I felt, add to the development I was doing on the Vision’s attempting to become ‘human.’”

It’s taken Wanda and Vision almost as much time to start opening up to each other in the Marvel Cinematic Universe. Paul Bettany appeared as Vision in physical form (after playing Stark’s A.I. assistant J.a.R.V.I.S. for a few years), and director Joss Whedon said in the Blu-ray commentary of Age of Ultron that he pushed in on Elizabeth Olsen’s Wanda right when Vision makes his epic debut, to set up their future romance.

What’s extra interesting about the photos, which can be seen via E!, is that Vision isn’t his normal red and green robot self. He looks just like regular Paul Bettany, which suggests that Vision can change his appearance.

Avengers: Infinity War will be the third film in the Avengers saga but 19th in the overall Marvel Studios series (not counting TV shows like Agents of S.H.I.E.L.D. or Daredevil). It’s set to be the penultimate film featuring the Avengers, with an untitled sequel to follow in 2019.

More like this
Entertainment
Sep. 22, 2022
She-Hulk Episode 6 just secretly introduced a mutant
By Dais Johnston
Entertainment
10 hours ago
How Werewolf By Night morphed into Marvel’s most exciting project yet
By Eric Francisco
Entertainment
12 hours ago
Will Agatha: Coven of Chaos feature one of Marvel’s oldest (and scariest) villains?
By Richard Newby
Related Tags
Share: