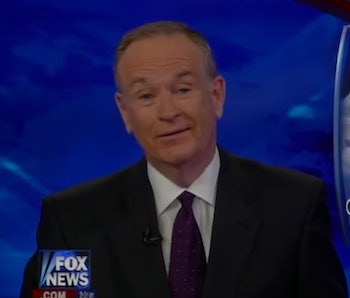 Bill O’Reilly, who was slated to be let go by the Fox News Channel on Wednesday in the aftermath of sexual harassment allegations by several women, also leaves behind a poor legacy regarding how he informed — or rather failed to inform — viewers of The O’Reilly Factor about climate change.

On the air since 1996, O’Reilly was a consistent ratings leader for Fox in his 8 p.m. time slot; last week in the middle of a scandal, he drew 3.7 million viewers as company after company pulled advertising from his show. The millions of people he misinformed on climate change — a scientific fact acknowledged by even Rex Tillerson, the former ExxonMobil CEO and the current Secretary of State — is breathtaking.

“Nobody can control the climate except God.”

Some of the things O’Reilly has said on the matter enter into the realm of utter outrageousness. He said on a 2011 episode of his show that “nobody can control the climate except God, so give a little extra at mass.” If that’s true, then there’s no reason for us not to accept our fate and just watch the ice keep melting?

O’Reilly has however indicated support for tax credits for clean energy businesses, an atmosphere-protecting move that would also lessen taxes on business — a GOP platform policy.

He also cautioned president Donald Trump to accept the Paris Climate Agreement but has always stopped short of actually addressing the issue directly: Climate change is both happening and is caused by human activity. His support of the Paris Agreement, after all, only existed because the agreement would “buy some goodwill overseas,” he said. “It doesn’t really amount to much anyway. Let it go.”

The Paris Climate Agreement was designed to cap the rise in global temperatures within a manageable (manageable being a relative term which here means “not as catastrophic”) threshold. Without American involvement, the deal would likely collapse, or the threshold would at least not be met because the world’s other biggest polluters — China and India — see the United States as a leader.

In 2002, O’Reilly said that “America needs to stop arguing over the cause of global warming and begin a disciplined 10-year plan to use fewer polluting agents, more conservation, and tons more innovation.”

But Americans clearly do need to keep talking about the cause. At the end of 2016, Pew found that most Americans still don’t acknowledge the “scientific consensus” on the matter.

Despite saying he’s in favor of less arguing, O’Reilly regularly allowed for climate change debates on his show, pitting skeptics against those who understood reality. In 2010, O’Reilly had on Bill Nye to debate the issue with meteorologist Joe Bastardi, who’s purportedly scientific stance is largely discredited by the scientific community.

Nye struggles through Bastardi’s interruptions to convey basic points about carbon dioxide and its effects on an atmosphere, and in the end, O’Reilly gives Bastardi the final word (he also had the first one, casting Nye as the underdog from the outset).

“No one knows for certain what causes climate fluctuations.”

In February 2014, O’Reilly commented that Obama was using climate change as a political tool — not an out-of-the-question tactic — to “raise his positive profile.” O’Reilly’s rebuttal to Obama’s comments on climate change went like this: “We know of no specific scientific evidence that California’s current drought is an offshoot of global warming,” O’Reilly said, before noting there was evidence the “world is getting hotter,” before inserting doubt into the whole matter: “No one knows for certain what causes climate fluctuations.” He sais this in spite of evidence that shows increased carbon dioxide traps hotter air lower in the atmosphere.

More like this
Culture
8.7.2022 12:00 PM
Nichelle Nichols’ legacy was so much bigger than her Star Trek kiss
By Matthew Delmont and The Conversation
Science
8.10.2022 3:27 PM
Climate change may push North America’s forests to a “tipping point”
By Tara Yarlagadda
Culture
8.9.2022 10:00 AM
The Sandman: 11 characters pulled from DC comics history
By Robin Bea
Related Tags
Share: