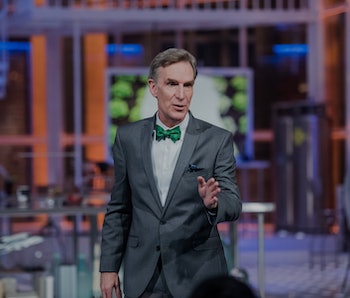 Bill Nye is no longer just a regular “science guy.” The 61-year-old engineer has morphed into a science superhero with a mission to do no less than save a world on the brink of environmental and intellectual demise.

The new Netflix series Bill Nye Saves the World, which premieres on Friday, covers a host of scientific topics in a format that marries important information with comedy. The show was officially announced in August 2016, only a few months prior to the election upset in November, which gave the writing staff a new sense of purpose.

The staff is uniquely constructed: Mike Drucker, one of the show’s two head writers, is leading the comedy team, while Phil Plait, also known as the “The Bad Astronomer,” heads the science team, though two groups often overlap. As Drucker puts it, the science writers act as the “guard against the comedy team looking stupid.”

Drucker has had a prolific career in comedy, starting out as a standup and eventually landing positions writing for for The Onion, McSweeney’s, and Saturday Night Live. For the last few years, he worked as a staff writer at The Tonight Show with Jimmy Fallon, having started when he was on Late Night.

Drucker emphasizes fact over funny even as the head of the comedy side, focusing primarily on educating people with the right information rather than the wittiest jokes. Inverse spoke with Drucker about Trump, echo chambers, and how he and Nye are plan to make a science show accessible to the masses.

Your career has been in standup and late night comedy. How do you think comedy can be used to promote science?

Well, I think one of the nice things about comedy and comedy writing is that it makes hearing things easier. It makes learning easier. That’s something that I had as a kid when I watched shows like Bill Nye the Science Guy or Beakman’s World. It’s not just, “We’re the truth tellers.” It’s also like, “I’m having fun while learning this.” I just think it makes it easier to digest. It doesn’t feel like work so you’re a little more open and relaxed and receptive because your guard’s not up as high.

President Donald Trump has promised to pull out of the Paris climate change agreement and represents a potential hindrance to progression of science. Do you feel there is a more of an urgency to educate viewers now more than ever?

I’m sure that, especially issues related to Trump’s administration, there’s more of an inclination to spread things. But I also think of a lot of these issues are things that existed before we thought Trump was going to get elected. It’s definitely an anti-science team, but you also had people who were denying climate change or denying that vaccines work, which are things that people have been denying or dealing with for years.

How do you plan to make a show discussing complex science topics accessible to viewers?

There are two different things to think about. There are people who maybe agree with you politically, but they don’t know why. A lot of people will say, “I believe in climate change,” and they’re right, but then they don’t have the information behind it when they’re at Thanksgiving and someone says, “Well I don’t believe it. Why do you believe it?”

Part of it isn’t just changing people’s minds. Part of it’s also saying, “Hey, maybe you already agree with me, but you don’t know all of the science behind it” or “Maybe you disagree, here’s more information on that topic.” And it should not be considered condescending to people who don’t agree.

We’re not trying to punch down and call people idiots. We’re more like, “Hey here’s all the information on this.” There’s also going to be people who agree with Bill Nye on 80 percent of the stuff that we talk about, but that 20 percent they’re like, “I don’t think that’s true,” but since they’re already a fan they’ll watch it and they’ll come away with a different opinion. And hopefully there’s people who grew up with Bill Nye who might disagree with him on a lot of things now, but watch it [and say], “Oh, I didn’t think of it that way” or “I never considered that.”

How do you approach subjects that still have a lot of grey area, and need more research?

Half our team [of ten writers] are comedy writers, but the other half are experienced science writers with Ph.D.s, with years and years and years of experience both writing about and educating people in science. Every topic we covered, we called experts. We made sure that, as far as the scientific consensus at the time is concerned, we’re correct. Obviously, things change, but that’s also what we talk about with science. It changes over time and we are just presenting what our research shows to be the scientific consensus.

How do the science writers factor into the comedy side?

Science writers will pitch jokes. Science writers definitely have some jokes in the show. A lot of it was them saying, “That’s not factual.” or you’d make a joke and they’d be like “this might obscure what we’re actually saying.” It’s so easy to change one or two words and suddenly you’ve changed the content of what you’re saying. They were the guard against the comedy team looking stupid.

Who pitches and decides on the subjects to cover for the show?

A lot of it this season were things Bill cares a lot about. For other things we talked it out in the room what we thought was important, that includes comedy and science writers.

There was a lot of discussion because there were one or two topics where you’d have people who were like, “I’m super passionate about this” and other people saying, “I’m not sure whether there’s a big enough debate about it.” Not that we rejected something important because we couldn’t cover it, but there are some topics where it’s like — and this isn’t an example we actually used — but you’re not going to convince people who don’t believe dinosaurs existed that they existed. It’s more like, what’s the pressing issue? Is it important to the world? It’s not just like silly fun-fact science. Are there misconceptions about it or social upheaval around it? And can we say something about it that is both correct and interesting?

What’s the experience been like working directly with Bill?

He’s awesome. He’s super funny and really knowledgeable. He’s been doing this for like, 25 years. He also knows TV well. The cool thing about him is he didn’t come in kicking down the door saying, “I’m Bill Nye the Science Guy, we’re going to do my show from the ‘90s again.” He came in saying, “Here’s what I’d like to do, here’s what I like that I’ve done in the past, here’s what I didn’t like about what I’ve done in the past, and let’s try to create a good show.”

Does he work in the writers’ room with you guys?

Especially on Twitter, it sometimes feels we’re all kind of arguing into an echo chamber. How do you get someone, a climate change denier for instance, to want to watch a show like this?

I think the goal is giving your opinion honestly without condescending or calling someone stupid. From a comedy perspective, it gets hard because calling someone stupid is fun. But you want to come from a perspective of like, ‘Listen we really just want you to have all the information on this. We don’t care where you live, we don’t care what your religion is or what your political affiliation is.”

More like this
Entertainment
8.11.2022 2:00 PM
The Midnight Gospel creator has “no hard feelings” over Netflix cancellation
By Jake Kleinman
Entertainment
8.5.2022 7:00 AM
The Sandman is Netflix’s first great comic book adaptation
By Mónica Marie Zorrilla
Culture
8.9.2022 10:00 AM
The Sandman: 11 characters pulled from DC comics history
By Robin Bea
Related Tags
Share: