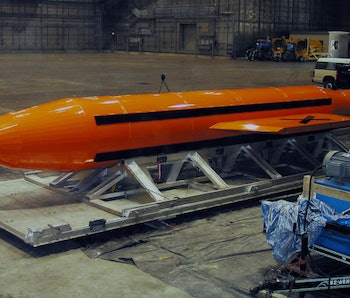 The “mother of all bombs” that the United States Air Force dropped on eastern Afghanistan on Thursday weighed 21,600 pounds. The vast bulk of the bomb’s weight came from the sheer amount of explosive material inside it, specifically 18,600 pounds of an explosive substance enigmatically called Composition H6.

H6 is powerful stuff. Packing a punch 1.35 times the power of TNT, the substance is commonly found in general-purpose bombs as well as in underwater blast weapons like mines, depth charges, torpedoes, and mine disposal charges. The U.S. Army has been using it since World War II, but Thursday’s deployment of the mother of all bombs — technically known as the GBU-43/B Massive Ordnance Air Blast Bomb, or MOAB — is probably the first time so much of it has been detonated at once.

H6 is a less volatile version of an older substance called Torpex — short for “torpedo explosive” — which is now obsolete. Torpex, an alternative to pure TNT, was crazy explosive, and H6’s relative storage stability, insensitivity to shock, and higher test temperatures made it more practical for military use. It’s made up of a cocktail of TNT, RDX (a chemical cousin of TNT that’s more explosive), and aluminum, together with some calcium chloride and a bit of paraffin wax for stability. Aluminum was added in order to increase the “explosive pulse” of the blast — that is, give the explosive gases more time to expand — thereby making it even more destructive. The calcium chloride was thrown into the mix in order to absorb moisture, which could lead to the production of unwanted hydrogen gas in humid conditions.

The explosive was originally developed in the United States, but it seems now that it is largely associated with Australian production. A report from the country’s Aeronautical and Maritime Research Laboratory noted some slight differences between American and Australian H6, noting that the Aussies add an extra step to remove any residual acid from the explosive cocktail.

Despite differences in the recipes made to use it, one thing is clear: This stuff is powerful, and reliably so. The 18,600 pounds of H6 contained inside the MOAB detonated to create a one-mile blast radius with the strength of 11 tons of TNT, likely flattening everything in sight.