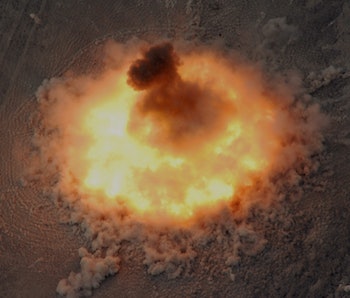 In early 1991, a small group of U.S. Army special forces operatives encamped near the triple border of Kuwait, Iraq, and Saudi Arabia received a strange warning from their commanders: The Air Force was going to drop a bomb nearby that might appear to be a nuclear weapon but was not. It’s not something the military usually needs to clarify. For weeks, Air Force B-52 bombers had been pounding the area, leaving the soldiers “pretty inured to the massive explosions,” Team Sergeant Michael Adams tells Inverse. The soldiers shrugged off the warning. Then the daisy cutter fell.

“I was about a mile away when it went off,” Adams says. “Despite the B-52s shaking the earth endlessly, that fucking thing was absolutely stunning. Earth-shattering, although I’d prefer another descriptive.”

The U.S. Air Force had dropped a BLU-82, commonly known as the “Daisy Cutter,” a 15,000-pound thermobaric weapon used for clearing minefields and helicopter landing zones in the Vietnam war. Later in its service, the military used the daisy cutter’s massive, raw destructive power as a psychological weapon against the Iraqi Army in the first Gulf War, and again against insurgents in Afghanistan.

On Thursday, the U.S. military dropped the daisy cutter’s successor, the 22,600-pound GBU-43/B Massive Ordnance Air Blast bomb, on an ISIS-controlled system of caves and tunnels in the Achin district of Afghanistan’s Nangarhar province filled with improvised explosive devices.

The “Mother of All Bombs,” as the GBU-43/B is often called, unleashed the force of 18,700 pounds of TNT on the area, causing a massive blast wave for a mile in every direction that killed dozens of ISIS fighters and destroyed at least three different caves. Civilian casualties, for now, are still unknown. After 16 years of conflict in Afghanistan and Iraq, the MOAB had never been used, even though it was the largest non-nuclear weapon in the U.S.’s arsenal. So why did the Pentagon decide to deploy it now?

Tactically, experts say the military didn’t have to. Instead, the only point of the MOAB strike was sheer shock, awe, and terror, to send a message of strength both at home and abroad.

“I’m guessing somebody wanted to make a statement by using it,” John Ismay, a senior crisis advisor at Amnesty International and former Explosive Ordnance Disposal Officer in the U.S. Navy, tells Inverse. “Unless Central Command or the White House can prove otherwise, from everything that’s come out so far, there doesn’t appear to be any particular reason why you had to use the MOAB.”

According to the military, the MOAB was used to clear an extensive network of booby-trapped tunnels and caves.

“This is the first time we have encountered an extensive obstacle to our progress that was constituted by I.E.D.s, the presence of tunnels and caves, and therefore this was the appropriate weapon to use at this time,” Gen. John W. Nicholson Jr., the commander of American and NATO forces in Afghanistan, said at a news conference in Kabul on Friday.

“It was the right time to use [the Mother of All Bombs] tactically against the right target on the battlefield, and it has enabled us to resume our offensive operations,” Nicholson said.

In a statement sent to Inverse on Sunday, a press officer for the ISAF forces in Afghanistan writes: “Our battle damage assessments are still being conducted. We will release more information as appropriate.”

The case for using the MOAB hinges on the specific way the bomb explodes. Most traditional bombs kill with fragments of their heavy metal casing blown apart by the explosives inside. But like the daisy cutter, the MOAB’s lethality comes from the shockwave it produces, a massive wall of compressed gasses that can clear out tunnels and caves like the ones it struck on Thursday.

“We made MOAB for this kind of target,” Mark Cancian, Senior Advisor at the Center for Strategic and International Studies told Wired. “My guess is that we just didn’t know where these tunnels were before.”

Ismay, who deployed to Iraq in 2007 and served as an EOD officer for eight out of his 11 years in the Navy, isn’t convinced that the MOAB was the right tool. He says that the Air Force’s BLU-118/B bomb is also a thermobaric weapon designed to destroy or kill targets in dense tunnel systems with the force of its blast. The smaller bomb is far more precise, as it uses a laser guidance system that’s more accurate than the MOAB’s GPS-based guidance. Ismay says a laser-guided bomb could be programmed to detonate inside the mouth of a cave, rather than a few feet above the surface, like the MOAB.

“If you really wanted to damage a cave, you’d want that explosive, that thermobaric explosive to be going off inside the cave itself,” he says. “[The BLU-118/B] can be fitted with a laser guidance package and fly that thing into a cave, so why didn’t you do that?”

Most modern militaries agree that there are four basic principles of the laws of armed conflict that govern any military action undertaken during war. Ismay says watchdog groups like Amnesty International pay special attention to military necessity: Did an attack use the necessary force or did it go overboard for no tactical reason?

“You could have gotten the same lethal effects [as the MOAB] from dropping bombs like the BLU-118 but just dropping several of them,” he says. “I’d be suspicious of the military necessity argument because there were these other options.”

Based on the two bombs’ net explosive weight — the most accurate way of determining their relative power bomb — the MOAB is roughly 33 times more powerful than the BLU-118. But based on the information available about the strike, Ismay says the smaller, more accurate bombs would have been more efficient.

“I don’t think it would’ve taken anything like 33 BLU-118s to do the job,” Ismay says. “It’s definitely not the only time the U.S. has attacked a target like this. Unless, of course, there’s something else the government isn’t telling us about.”

In 1991, Adams says the military was “allegedly trying to clear a minefield” when it dropped the daisy cutter near his unit, “but there was no way they didn’t kill a bunch of people,” he says. An archived NBC News report from February 12, 1991, acknowledges that daisy cutters were used against the Iraqi army in an attempt to force Iraqi President Saddam Hussein to back down, not as a countermeasure against mines.

“[It] leads me to conclude that the use of the MOAB in Afghanistan is completely inappropriate,” Adams says.

The MOAB and the daisy cutter, Adams says, were designed for conventional warfare against conventional formations (like the battle against the Iraqi army in the first Gulf War), not for the asymmetric conflict in Afghanistan where there are “civilians everywhere.” The DoD’s press release about the strike states that “U.S. forces took every precaution to avoid civilian casualties with this strike and will continue offensive operations until ISIS-K is destroyed in Afghanistan.”

On Friday, a Pentagon spokesperson told The Washington Post that the U.S. forces in Afghanistan (USFOR-A) would not put out an official statement on casualties caused by the strike. The press desk for the USFOR-A did not immediately respond to Inverse’s request for comment.

“In my opinion this weapon was used to send a foreign and domestic message,” Adams says. “It’s total bullshit that Trump wasn’t using this to fulfill his ‘bomb the shit out of ISIS’ domestic message.” For North Korea and others “flexing,” Adams says, the show of power is legitimate — but only if it had been dropped on a conventional battlefield, and “not in an area with a large, intermingled civilian population.”

As Ismay points out, violence and war are inherently traumatic. But in areas like Afghanistan, where war has become a fact of daily life for much of the country, he says the U.S. has a duty to minimize the trauma it causes.

“Any time someone’s dropping a bomb near you or trying to kill you it’s scary. I don’t think something needs to be extra scary,” Ismay says. “I think everyone in Afghanistan knows that there are Americans in town that can kill them from the sky in any number of ways.”

“What’s the military benefit of scaring civilians or trying to scare them more than they would be already?”

On Friday, President Donald Trump praised the strike as “another very successful mission.” It’s unclear whether he directly authorized the first use of the MOAB.

“Everybody knows exactly what happened and what I do is authorize my military,” Trump said. “We have the greatest military in the world and they’ve done a job, as usual, and so we have given them total authorization.”

And with that authorization, someone decided to drop a bomb that had never been dropped before.