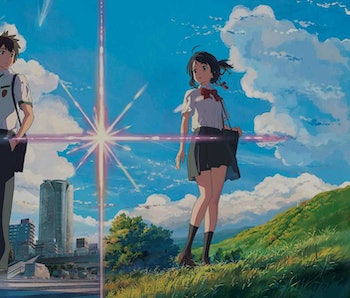 Your Name., the highest-grossing anime film in history, finally hits U.S. theaters this month, having already beaten Spirited Away, Howl’s Moving Castle, and Pokémon: The First Movie at the box office. Japanese and American critics alike have tried to decipher why the movie has destroyed previous box office records, and the leading theory is that Your Name. hits grown-up Miyazaki fans right in the gut.

Though the film conquered theaters across Asia this summer, critics say it’s not likely to do the same in America. Anime as a medium is still a niche art in the United States. This anime in particular dramatizes a tension that teenagers in Japan feel more acutely than American teens: the pull between an Old World religious culture and the allure of modern technology.

Your Name. (Kimi no Na wa.) follows Taki, a teen boy living in downtown Tokyo, and Mitsuha, a teen girl living in the Hida mountains. The teens mysteriously begin switching bodies a day at a time, though they don’t remember what happened once they regain their own bodies the day after a switch. They begin communicating through their journals, and then through text messages, at first angrily, and then supportively, as they begin to fall in love through distance and time.

It’s a grown-up story all around; one running joke sees Taki kneading his own breasts when he’s inside Mitsuha’s female body, though Mitsuha is clearly frightened by Taki’s penis when she inhabits his body.

Mitsuha’s family requires her participation in old religious rituals, and she complies begrudgingly, even when her fellow high school students attend the priestess events solely to mock her. Taki, on the other hand, is a typical over-achieving city teen, working a part-time job after school and concerning himself more with texting his friends and winning the Tokyo “rat race” than with introspection. Like two halves of modern Japanese culture, Mitsuha and Taki have a ton of things to teach each other.

The film shares its magical realism with many anime feature films, including the seminal works of Hayao Miyazaki. Dr. Susan Napier, a professor of Japanese Studies at Tufts University and author of Anime from Akira to Howl’s Moving Castle: Experiencing Contemporary Japanese Animation, told WNYC that the film simply allows Miyazaki’s dreamworld to mature along with its central audience.

Whereas Spirited Away’s Chihiro is focused on saving her parents, Your Name.’s Taki and Mitsuha concern themselves simultaneously with finding their adult purposes in life and falling for each other. As Napier explains, Miyazaki allowed children around the world to “believe their fantasy worlds were real.” Your Name.’s director and writer, Makoto Shinkai, tells “adolescents and people in their 20s” that their youthful belief in the impossible doesn’t have to disappear.

Your Name. is playing in select theaters nationwide.