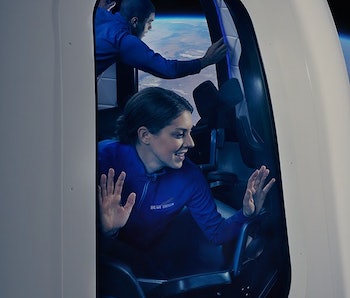 Blue Origin had one hell of a time at the 33rd Space Symposium recently. Founder and CEO (and Lex Luthor look-alike) Jeff Bezos, along with others, dropped plenty of delicious space nuggets throughout his time at the event, from how he plans to continue (in part) to fund Blue Origin, to how close the company is to getting its American-made BE-4 engine on the market.

Here’s an interesting bit that didn’t surface until recently: the company’s space tourism vehicle New Shepard will not have a bathroom or any facilities to take care of human waste. If you need to poop or barf — whether you simply had a bad lunch before the flight, or the excruciating G-forces are getting to you pretty harshly — you are shit outta luck (pun totally intended).

That’s a drag, because the interior of the crew capsule looks pretty amazing. Any accidents that occur inside will basically be uncontainable; everyone onboard will need to deal with any kind of bodily-fluid disaster and be forced to reckon with it until landing.

Space.com reports that, besides the news of no waste removal system on New Shepard, Blue Origin’s space tourism service may also feature a lottery for people who cannot afford the full price of a short trip to sub-orbital space.

The idea is for New Shepard to take up six passengers out to 62 miles above the surface of the Earth — the boundary of the the planet’s atmosphere and space. Passengers will get to experience weightlessness, see the curve of the planet (suck it, Kyrie Irving), and gaze off into the infinite vacuum of space. Each trip only lasts about 11 minutes, with only four minutes of weightlessness — but hey, that’s four more minutes than nearly everyone else in the world gets to enjoy.

To safeguard the need to take a space poop, Blue Origin will only board New Shepard 30 minutes before takeoff. Be ready to use the bathroom before then, and for God’s sake hold it in if you need to go while you’re up there.

Bezos told symposium attendees that although nausea in weightlessness is common (hey there, Vomit Comet), the effect is delayed, and people usually only start to feel sick after about 3 years into space flight.

In addition, the company will take tourists through two days’ worth of preparation and training before the flight, in order to minimize any concerns and make passengers feel as comfortable as they can for the trip.

It’s still unclear how much tickets will be, but for something that will almost surely cost six figures, two days’ of training is the least you’re paying for. Just be sure to use the bathroom before hand — you don’t want to be the dude who shat themselves after taking out a new mortgage to pay for a trip to space.