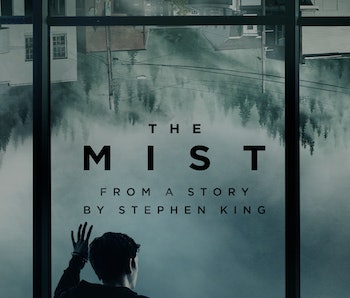 Stephen King’s “The Mist” — a novella about the evils that emerge when a small town grocery store is placed inside a pressure cooker of mysterious mist and supernatural creatures — is getting a television adaptation from Spike. The first official trailer for the series, which will expand greatly upon King’s original work, reveals it to be a series focused on religion, sex, and sanity. There’s also a lot of screaming involved.

“I wanted to be respectful to the source material, but my feeling was there was already a great adaptation out there by Frank Darabont,” series creator Christian Torpe told Entertainment Weekly, speaking of 2007’s drastically dark take on King’s original novella. “The novella is 200 pages and one location, and we needed to change that to make an ongoing series. But we wanted to remain faithful to the heart of the story.”

King’s original story, for those not in the know, is about the onset of a mysterious mist and a group of people trapped inside a grocery store because of it. Supernatural creatures roam outside and there’s a theory about the mist being a government installation after two soldiers commit suicide. Leaders arise in the group and there are plenty of questions about religion and the sins of humanity. It’s dark stuff, but it mostly focuses on a single group of people. The upcoming show from Spike will jump between groups.

“But we are not just in the mall,” Torpe said. “We establish different little pressure cookers under the influence of whoever the leader would be in those locations. Each of them come up with different theories or beliefs about what’s going on. Eventually, the story lines will dovetail and turn into conflicts.”

There’s a shopping mall and a church included in the series and an enormous cast of characters who are all interconnected, some looking to take revenge and others just looking to take power.

“It’s a weird cousin to the original material,” Torpe said. “It has a constant ebb and flow communication with the novella. But who knows? Maybe some of the original characters will make a cameo at some point.”

The trailer hints at a dark, wild ride.