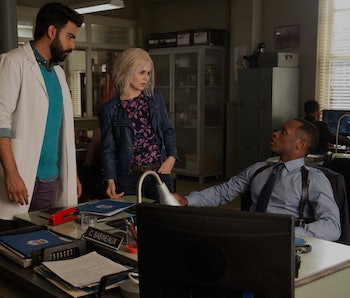 This week’s iZombie crams a bunch of pop culture shout-outs into a tight 30 minutes. In flashbacks, we watch Clive bond with the little zombie boy who was killed last week, first discussing Tony Stark and then watching Game of Thrones. Later, Liv interrogates anti-zombie preppers who sound a whole lot like The Walking Dead fans, cleaning their actual guns and describing their fantasies about mowing down the undead by the hundreds.

Though iZombie is definitely a show about the undead, it does as much as it can to “humanize” its zombies, who now outnumber the living people in the cast. These nameless characters who get all hot and bothered about being “allowed” to kill creatures who look human are especially uncomfortable in the world of iZombie, but these doomsday preppers also exist in real life.

It appears iZombie will only continue to explore this uncomfortable scenario. In the background of this week’s episodic murder, we learn that the zombie military has developed a brain sludge that saves the consumer from having visions or taking on the personality traits of its “victim.” That military is also preparing, as the anti-zombie crazies are, to fight in a war that will likely erupt before this season is over.

iZombie airs Tuesdays at 9 p.m. Eastern on The CW.