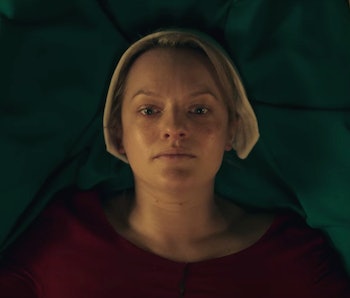 In the dystopian world of Margaret Atwood’s famous novel The Handmaid’s Tale, the most memorable aspect is the ritualistic sex ceremonies. In a new interview, Atwood revealed her unexpected inspiration: the Bible.

In the novel, The Handmaid’s Tale, which is also an impending Hulu series and possibly an impending sequel story, the future America is known as Gilead. It’s a totalitarian theocracy in which women’s rights are stripped. They aren’t allowed to hold jobs or own property, and they’re cast into strict societal roles. If they’re fertile, they are assigned to a household as a Handmaid, which entails reproducing with the male head of the household while his wife is present. It’s surreal and supremely uncomfortable. But in a New Yorker profile, in the April 17 issue, Atwood reveals that all of her inspiration came from the real world.

In writing “The Handmaid’s Tale,” Atwood was scrupulous about including nothing that did not have a historical antecedent or a modern point of comparison…The ritualized procreation in the novel—effectively, state-sanctioned rape—is extrapolated from the Bible. “ ‘Behold my maid Bilhah, go in unto her; and she shall bear upon my knees, that I may also have children by her,’ ” Atwood recited. “Obviously, they stuck the two together and out came the baby, and it was given to Rachel. No kidding. It is right there in the text.”

The Handmaid’s Tale premieres on Hulu on April 26.