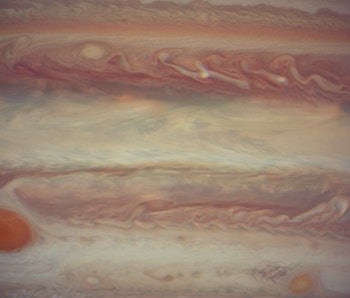 NASA’s Hubble Space Telescope does it again with another beautiful shot of Jupiter and its giant red spot, made possible by the fact that Jupiter is at its closest to Earth right now, and the hemisphere facing us was illuminated by the sun some 490 million miles away — creating a sultry array of oranges and pinks.

Hubble used its Wide Field Camera 3, which uses a combination of visible, infrared, and ultraviolet, to get this awesome shot on April 3. The close up is so detailed that Hubble can analyze features just 80 miles across. For reference, the Great Red Spot, a giant hurricane-like storm with winds up to 270 mph that has been raging for centuries, is approximately 25,000 miles across.

The beautiful bands of Jupiter are differentiated by the chemical composition of the clouds and wind currents across the different latitudes of the planet. The bands never really change because at 3.1 degrees, Jupiter doesn’t have much of an axial tilt (by comparison, Earth’s tilt is about 23.5 degrees).

There are also smaller storms sprinkled throughout the planet, that can be seen in the circular formations of Jupiter’s clouds. The lower right one is known as Red Spot Jr., which is about half the size of the giant one.

Jupiter is still quite a mystery to scientists, which is why there is so much focus on currently studying it through NASA’s Juno space probe, which entered the planet’s orbit last year and has been stunning scientists with beautiful images similar to Hubble’s. That mission is expected to end in February 2018.