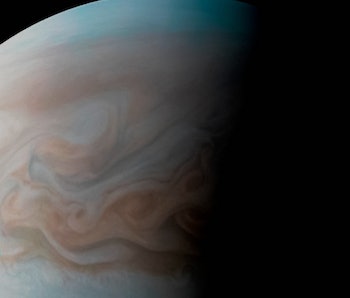 With their sweeping hues of blue and red creating a stunning portrait of spiraling curves, the whirling clouds of Jupiter look like a distant cousin of Vincent van Gogh’s famed The Starry Night painting — at least in this new image captured by NASA’s Juno spacecraft.

This stunner was snapped by the probe’s JunoCam, which delivers high-resolution photos to citizen scientists so they can create works of art like this:

This particular image was enhanced by Sergey Dushkin to highlight the beautiful flowing clouds in the Gas Giant’s thick atmosphere. The striking patterns are caused by the extraordinary chemical composition of the planet. Scientists believe Jupiter consists almost entirely of gas and has no solid surface. The initial cloud layer we see here is 30 miles thick and is composed of methane, ammonia, water, and sulfur, which causes constant hurricane-like cyclones throughout the visible region of the planet. Beneath that layer, there is believed to be 13,000 miles of gas, mostly hydrogen and helium.

This close-up region in the image lies west of the great red spot in the South Equatorial Belt. Jupiter has a series of belts, which run parallel to each other and contain different concentrations of chemicals. The South Equatorial Belt divides two distinct. Jupiter has a dozen zones and in each lies zonal atmospheric flows, which act as jets pushing winds up to 400 miles per hour across the zonal plains. This causes the different phases of cloud concentration and color.

Juno’s journey is expected to continue late into mid-2021, meaning citizen scientists still have a while to perfect their craft and stir up some beautiful images of the fifth planet from the sun.