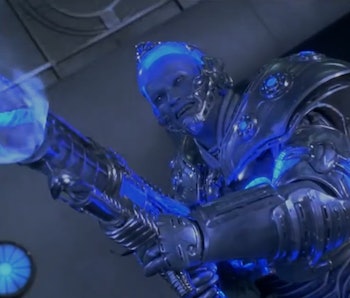 When Arnold Schwarzenegger was serving as the governor of California, he had to put his acting career on ice for a little bit. But he’s back at it now, and he says he’s up for taking on a role in the spirit of one of his most infamous performances of all time: Mr Freeze in Batman and Robin.

Fandango asked the actor if he would ever consider playing another member of Batman’s rogues gallery. Schwarzenegger thought it was a pretty cool idea.

Batman and Robin is widely (and, frankly, unfairly) labeled one of the worst superhero movies of all time, so the fact that Schwarzenegger would be down to play a bad guy again, despite that film’s icy reception, is telling.

For now, he’s not attached to any superhero project with Marvel, DC, or any other studio. Which, frankly, is for the best. It’s going to be hard to top his chilling performance as Mr. Freeze, but it’s nice to know he’s game.