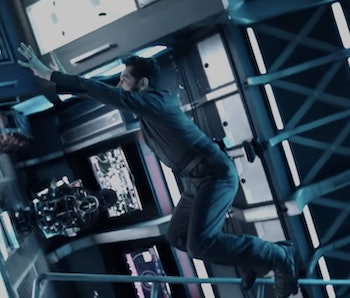 If Syfy’s epic space opera The Expanse needed one short scene that perfectly summed up the entire show, it would be the moment when pilot Alex Kamal (Cas Anvar) drinks beers in zero gravity while listening to country music.

Last week, in the tenth episode of The Expanse’s second season, Alex was all alone aboard the Rocinante and feeling the space blues pretty hard. And so, being the Martian country boy that he is, Alex cranked up the Hank Williams Sr. country music classic “I’m So Lonesome I Could Cry” and knocked back a few space beers in zero gravity. Make no mistake this scene is peak Expanse style. The latest Alien: Covenant trailer may have played the country music/science fiction juxtaposition card by busting out John Denver’s “Take Me Home, Country Roads,” but The Expanse pulled this combo off with more charm. As Alex careens around in midair, all the deeper literary and philosophical questions in The Expanse briefly melt away and are replaced with a new question: If you listen to Hank Williams in outer space and no one is around to see it, did it really happen? Answer: YES.

Watch the exclusive clip below:

The Expanse airs on Syfy Wednesday nights at 10 p.m. Eastern. There only three episodes left in this season; the Season 2 finale will air on April 19.