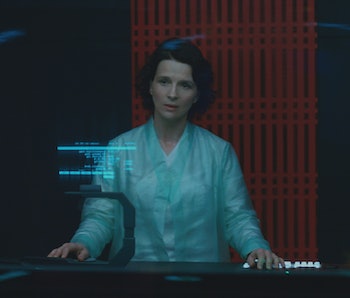 In Ghost in the Shell, an evil futuristic tech company called Hanka Robotics becomes the de facto antagonist in the film, which is ironic since the film’s hero is a cyborg. As a human brain in an artificial body, Scarlett Johansson’s the “Mira” or “Major,” becomes a contemporary Frankenstein’s creature. And in one of the film’s more emotional scenes, the Major’s creator, Dr. Ouelet (Juliette Binoche), gives life to a refreshing cinematic phenomenon: a gentler and saner Dr. Frankenstein archetype. Hanka Robotics might be the evil corporation, but the film’s mad scientist is sympathetically human and far less mad than usual fare.

In addition to “Beat” Kitano’s performance as Aramaki,, Juliette Binoche’s Dr. Ouelet provides Ghost in the Shell with much-needed gravitas and heart. If Kitano gave the film its Japanese street cred, then Binoche creates the film’s philosophical center. As she revealed in an interview for Paris Match, Binoche had initially turned down the role in Ghost in the Shell but was persuaded to join the film by director Rupert Sanders. She sees her character, Dr. Ouelet, as “a scientist who signed with the devil.”

But Dr. Ouelet doesn’t exhibit the same kind of delusional mania most mad scientists often exude. She’s maternal toward the Major, even as she tries to balance the practical repercussions of her wildly monstrous experiments. Ouelet isn’t one of the good guys, and her ethical beliefs certainly veer toward a scary version of the ends justify the means. After all, she’s killed many people in order to get to Major’s rebirth. And yet, because of Binoche’s performance, it’s easy to believe that Ouelet has crafted a new type of life, and that she cherishes that life.

Dr. Ouelet doesn’t get a big Frankenstein scene in which lightning strikes and her creation awakens while she cackles insanely. Instead, her biggest moment in the movie is when she’s given the option to euthanize her creation and instead sets the Major free and pays the ultimate price. This could have been overly moralizing, but it isn’t. Ouelet doesn’t die believing she did wrong by creating Major. In her mind, the human cost of creating Major is still worth the price, solidifying the mad scientist trope and her place in it.

And yet, when she dies, the audience’s instinct is to mourn. That’s how Ouelet subverts the mad scientist trope.

When Roy Batty confronts a similar Dr. Frankenstein — Dr. Tyrell in Blade Runner — the audience isn’t really sorry to see Tyrell killed because he seems like an asshole. Conversely, in the 1931 movie version of Frankenstein, the titular mad scientist deserves death by his own creation because he’s so genuinely awful. Dr. Ouelet in Ghost in the Shell doesn’t elicit any of these feelings from the audience, because the character cares about more than preserving her own ego. Yes, Major is her greatest work, but Ouelet recognizes that there’s a lot to Major that she had nothing to do with. Major is still a person and an uncontrollable factor, and Ouelet is never blinded to that fact by her own ego.

Part of why this works is because Ghost in the Shell — despite its subject matter — doesn’t come across as rabidly technophobic. The way in which the Major’s original human persona — Motoko Kusanagi — is transformed into a new cyborg person was unethical, but the facts are what they are. Now that she exists, her life has a right to continue. And so, when the time comes to kill Major, Dr. Ouelet not only fakes out her corporate stooge-boss and tells her to run, but she also stays behind to take a bullet and buy Major time. The whole thing plays out like a mother dying for her daughter, not a mad scientist being executed for crimes against nature.

This fact, coupled with the truth that many of the excellent scenes between Binoche and Johansson breezily pass the Bechdel test, proves that at its heart, Ghost in the Shell is a human story. Though buried under some beautiful, candy-coated CGI, Ghost in the Shell manages to subvert a tale as old as time.

Ghost in the Shell is out in wide release now.