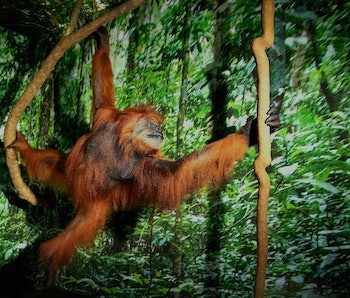 Like humans, it seems apes are more inclined to help you if you look tragically dumb and they feel sorry for you. They’re much more likely to help a fellow ape with a task if they know that the other chimp is mistaken about some part of the process, meaning great apes are intelligent enough to distinguish false beliefs from true beliefs and base their behavior off that awareness. It’s the first time researchers have shown that great apes use their awareness of false beliefs to help others.

“Great apes” is an umbrella term here that refers to chimpanzees, bonobos, and orangutans. The researchers tested 34 great apes at a German zoo by having someone put an object in one of two boxes. Then they left the room, and the object — while the apes watched — was either left in place or switched to the other box. If the person re-entered and started trying to open the closed box that still contained the object, the apes sometimes went to help them. But if they re-entered and tried to open the box without knowing it had actually been switched to the other, the apes were significantly more likely to open the correct box, inferring that that’s what the misguided human was actually trying to get at. A study detailing the research was published Wednesday in the journal PLOS ONE.

This kind of advanced social cognition was — until recently — thought to be exclusively relegated to humans. Research had already shown great apes to share it, but this is the first time we’ve gotten proof of social interaction. The experiment was initially designed for one-and-a-half year old human babies, but lead author David Buttelmann says that given the similarities in performance, he’s confident making the comparison that great apes understand the beliefs of others on the level that human toddlers do.

“The reason we test with apes is not only because it’s fun,” Buttelmann tells Inverse. “It’s mainly to find out about evolutionary abilities. If you want to know how a species’ cognitive ability evolved, it’s very useful to test other species to see if they have the same ability.”

Understanding the behavior of others in a wide variety of circumstances requires an understanding of their psychological states. Humans’ nearest primate relatives, the great apes, understand many psychological states of others, for example, perceptions, goals, and desires. However, so far there is little evidence that they possess the key marker of advanced human cognition: an understanding of false beliefs. Here we demonstrate that in a nonverbal (implicit) false-belief test which is passed by human 1-year-old infants, great apes as a group, including chimpanzees (Pan troglodytes), bonobos (Pan paniscus), and orangutans (Pongo abelii), distinguish between true and false beliefs in their helping behavior. Great apes thus may possess at least some basic understanding that an agent’s actions are based on her beliefs about reality. Hence, such understanding might not be the exclusive province of the human species.

More like this
Science
6.22.2022 8:26 PM
Yes, there are mites living on your face — and they can poop, a new study finds
By Allison Parshall
Science
6.22.2022 10:00 AM
Look: This black hole illusion reveals an innate evolutionary instinct
By Jennifer Walter
Science
6.27.2022 11:00 AM
Letting your cat go outside could spread “life-threatening” parasites — new research
By Amy Wilson, Scott Wilson and The Conversation
Related Tags
Share: