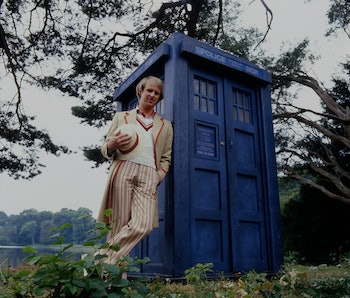 Season 10 of Doctor Who will materialize this year on April 15 on BBC and BBC America, but thanks to time travel (and streaming) fans can watch Season 11, Season 15, or even Season 19 right now. To be clear, these seasons aren’t “new” adventures of the Doctor, but they might be new to some fans. Prior to the 2005 relaunch of Doctor Who, the original show ran for 26 seasons starting in 1963 and ending in 1989. From a continuity point of view, this makes Christopher Eccleston’s 2005 1st season, technically, the 27th season of the show, but whatever.

As of today, the online streaming service BritBoxhas an impressive amount of classic Doctor Who added to its catalog. In North America, this appears to be the best place to stream the entirety of the old-school Who catalog. But with 26 seasons, where does one start? Here, in no particular order, are five essential stories to give you the gist of Doctor Who in the 20th century:

In 1973, Jon Pertwee had established himself as the third and the definitively most dashing version of the Doctor. Almost every single British action cliche (including an Austin Powers puffy shirt) comes from Pertwee’s performance as the near-immortal Time Lord. And so, well into his run, Doctor Who did its first big retrospective with the four-part episode “The Three Doctors.” Nearly everything contemporary fans loved about “The Day of the Doctor” in 2013 has its origins with this arc: three Doctors get together, a UNIT conflict is going on on Earth, and the high council of Gallifrey enlists the help of multiple versions of the Doctor to save all of time from collapsing. Pertwee was joined by previous Doctor Patrick Troughton, while William Hartnell appeared in a limited form as the 1st Doctor. By the time of “The Five Doctors” in 1983, the 1st Doctor was played by Richard Hurdnall. Combined with David Bradley in 2013’s “An Adventure in Time and Space,” this makes a grand total of three actors who have played the very first Doctor.

The first time the Doctor visits the planet Skaro, he’s got a bit of a mutiny on his hands. Schoolteachers Ian Chesterton and Barbara Wright are pissed about the Doctor taking them through all of time and space and are determined that he’s crazy. Even his granddaughter Susan suggests “he’s so forgetful!” This is a nice reminder that the heroic Time Lord has been gruff, grumpy, and straight-up eccentric since the very beginning. Funny thing: This episode is the first in a four-part serial, and you wouldn’t even know it was about the Daleks until the very last, almost Hitchcockian shot of a Dalek advancing on Barbara. Chilling!

A classic Cybermen story also highlights the strength of the Peter Davison’s 5th Doctor era: the magic of an ensemble. These days, we tend to think of Doctor Who as being the Doctor plus one or two companions. At this point in the Davison era, the Doctor had three companions: Adric, Teegan, and Nyssa. While this episode also helps to explain why the dinosaurs died, it also is notable because one of these wonderful companions doesn’t survive. It would be a spoiler to say which one. This is also perhaps Davison’s best performance as the Doctor, suggesting a kind of weary angst, later channeled by Matt Smith’s 11th Doctor.

Often cited as a certified Doctor Who classic, “City of Death” delivers on literally every single thing you could want from a 4th Doctor (Tom Baker) romp. There’s a great paradox involving the beginning of time, a trip to Paris, art forgery via time travel, and an excellent alien villain who rips his own face off. Julian Glover (later famous for The Empire Strikes Back and Indiana Jones and the Last Crusade) is excellent as “The Count,” while Lalla Ward gives a charming performance as the Time Lady Romana.

An underrated Tom Baker adventure! Before Lalla Ward was the Doctor’s Time Lady companion Romana, she was previously played by Mary Tamm. Like the Doctor, Romana is from Gallifrey, so just like him, she regenerates. “The Androids of Tara” isn’t the best Doctor Who story of all time (the title gives away what it’s about) but, Mary Tamm as Romana is fantastic. Other than the Doctor and the Master, Romana is the only other Time Lord/Lady character we’ve seen in multiple incarnations, and if fans have never experienced both Romanas, “The Androids of Tara” is a great sampling of Tamm’s charm. Biggest question: Why has contemporary Who never brought back Romana? Did she die in the Time War or what?

Check out the Britbox selection of classic Doctor Who here.

More like this
Entertainment
8.1.2022 2:00 AM
Westworld Season 4 just copied one of the best Doctor Who episodes ever
By Ryan Britt
Entertainment
8.9.2022 1:00 PM
Has your favorite HBO Max show been canceled? The fate of 9 sci-fi series revealed
By Robin Bea
Culture
8.3.2022 9:00 AM
7 amazing sci-fi shows and movies coming to HBO Max in August 2022
By Robin Bea
Related Tags
Share: