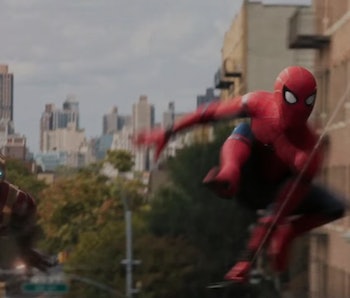 Marvel’s newest Spider-Man, a notably younger version of Peter Parker than we’ve seen in recent big-screen iterations, apparently needs parental supervision at all times. The latest trailer for Spider-Man: Homecoming reveals that Tony Stark takes his gifted Spidey suit back from Peter halfway through the film, but it turns out that Peter never had full control of it anyway. Tony had Peter under strict supervision with a babysitter and parental locks the whole time.

Peter (Tom Holland) is fresh off the events of Captain America: Civil War in the upcoming Spider-Man: Homecoming, and it seems that Tony Stark (Robert Downey Jr.) is well aware of just how much guidance Peter needs. According to Homecoming co-producer Eric Carroll, as reported by Screen Rant, Spider-Man’s new suit has a parental lock on it, meaning it boasts a lot more features that Peter can access right away due to the “Training Wheels” functions Tony installed at the get-go.

Oh, and Peter will get his own personalized JARVIS, the incredibly astute artificial intelligence Tony has installed in all his Iron Man suits and throughout his company and labs. (The original JARVIS has since been reborn as Vision, so Peter will really be getting a JARVIS-esque A.I. helper. Still pretty sweet).

“So the suit starts doing a bunch of stuff,” Carroll says. “You know, it does a holographic interface, and things like that. But probably most notably, it starts talking to him, and he goes, ‘Oh, this is weird.’ And he starts asking it stuff, but he’s not super slick or Tony Stark smart, who invented the OS and did all this. He’s a kid. So he’s like, ‘Um, how do I get to where that thing is?’”

Not only do these revelations mean that Peter’s going to be flailing around when his suit starts talking to him and learning new tricks throughout his time in spandex, they also mean that Tony’s getting a little smarter too. Tony Stark (as well as his cast of supporting characters such as Jon Favreau’s Happy Hogan and, maybe, Gwyneth Paltrow’s Pepper Potts) will supposedly play a large part in the upcoming Homecoming in order to fully integrate Spidey into the MCU, since a 15-year-old Peter Parker has been missing out on most of the action. It’s nice to know that at least someone will have Peter’s back along the way.